Get notified about new releases

The new Late Roman sets are right around the corner, and Steve at Little Big Men Studios has pulled out all the stops to make sure we have a fully comprehensive collection of shield transfers.

This includes a huge amount of variety for not only the fundamental Late Roman variants of the kits, but also the different faction variations the kits offer. This includes Arthurian/Romano British, Goths, Germanic, and early Byzantines.

Steve has also kindly provided information on each of the shield designs, which particular units may have used them etc, as well as a bit of background on the design.

Take a look at this huge collection below. 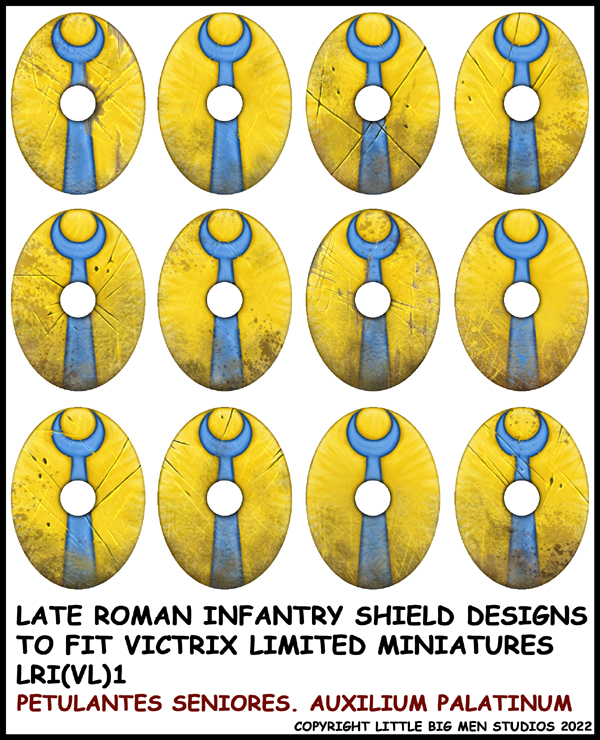 Petulantes Seniores, Auxilium Palatinum: (Name of unit who used this type of shield)

These were an Elite unit in the Western army. They are recorded serving under Constantine I and Julian. They were often brigaded with the Celtae. 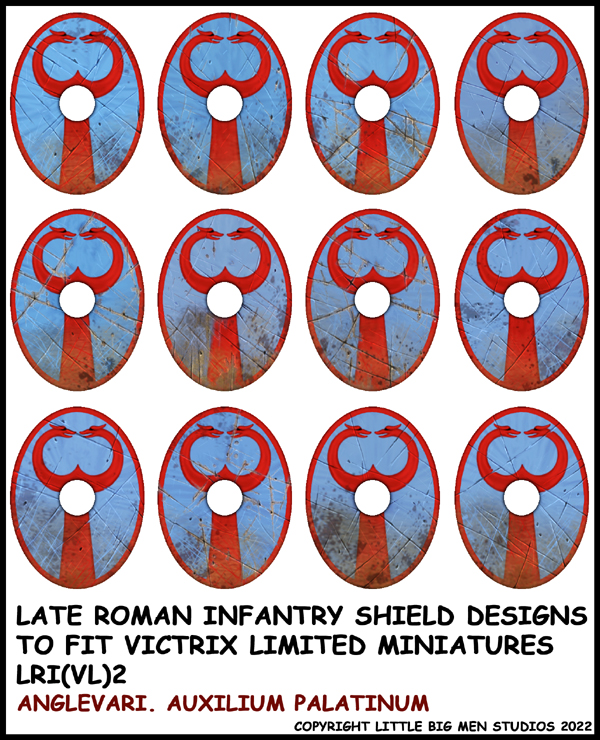 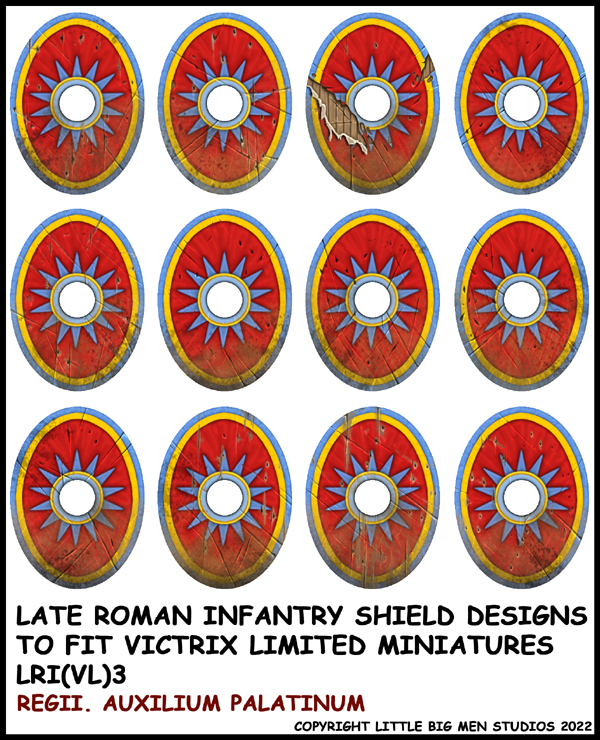 These survived in the early Byzantine period and served under the great Byzantine general Belisarius. 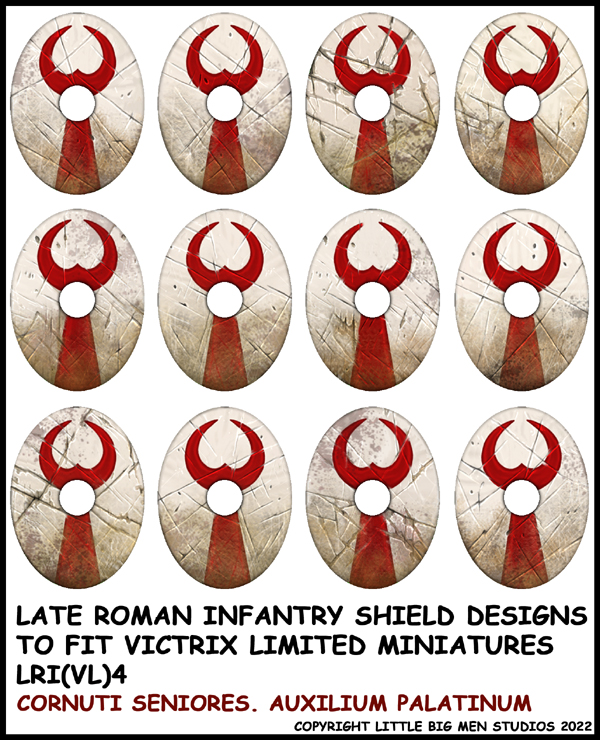 These were recruited from Romes Gallic provinces. They had a fearsome reputation and fought well against the Alemanni at the battle of Argentoratum holding the enemy cavalry until the Roman cavalry could return to drive them away. The were known to perform the Barritus, a shout combined withy a war dance often used by the Germanic tribes and said to instil fear in the enemy. 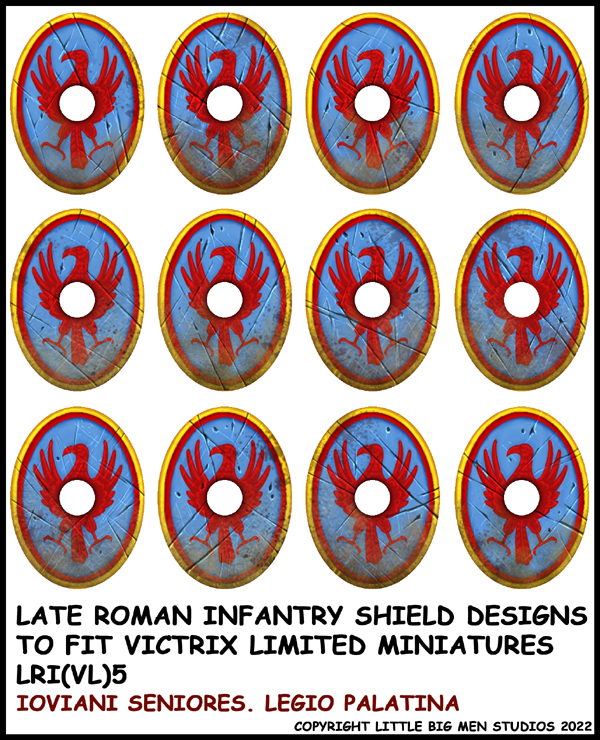 This began as an Imperial Guard unit under the Emperor Diocletian and continued as a senior unit of the Western and Eastern field armies. They were skilled with darts. 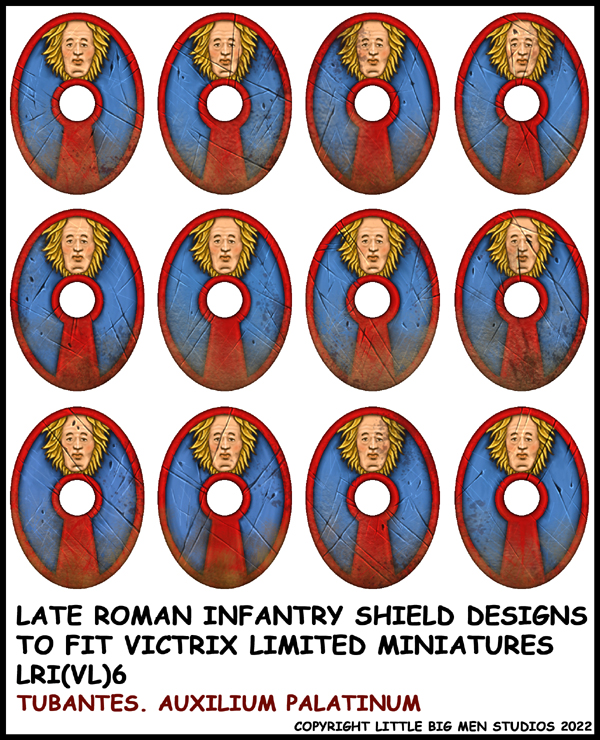 These were an Elite unit of the Western army. 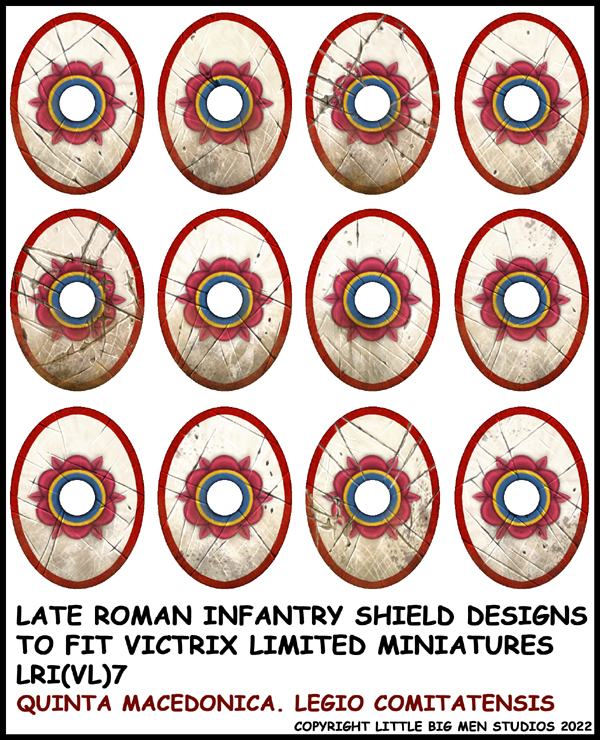 This was one of the older border legions raised during the time of Julius Caeser. They were mostly stationed in the Balkans and the legion survived well into the Byzantine period. Detachments were stationed in Egypt as we have records of them in the 7th Century fighting against the Islamic incursions in that period. 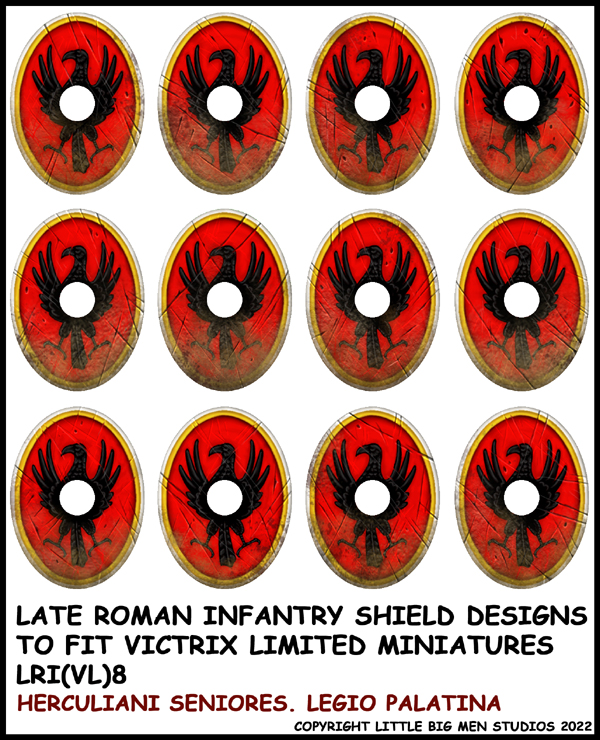 This began as an Imperial Guard unit under the Emperor Diocletian, raised at the same time as the Ioviani Seniores. They were often brigaded together in the field. They were a senior Legion serving in the Western and Eastern field armies. Like their sister unit they were also skilled with darts. 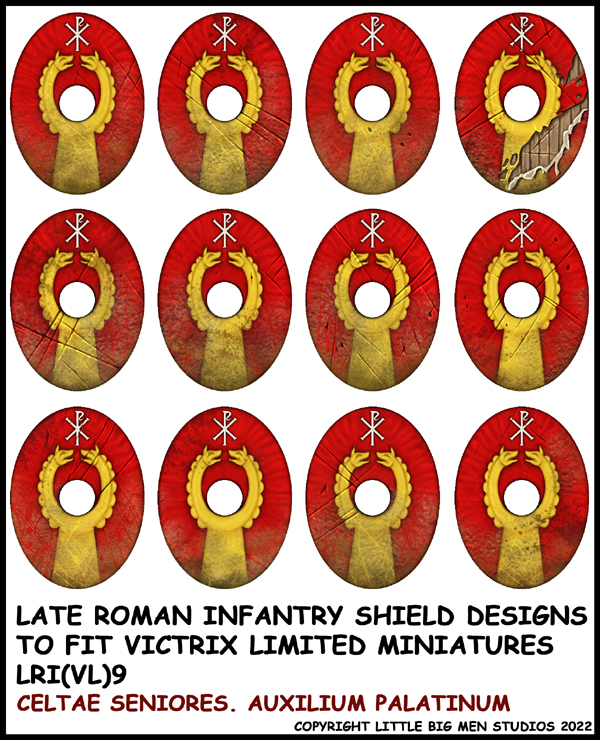 These were the 4th most senior Auxilium Palatinum unit in the western half of the empire. The were often brigaded with the Petulantes Seniores and fought under Julian against the Alamanni. The Chi Rho symbol was said to be added when they were fighting for Constantine marking his conversion. 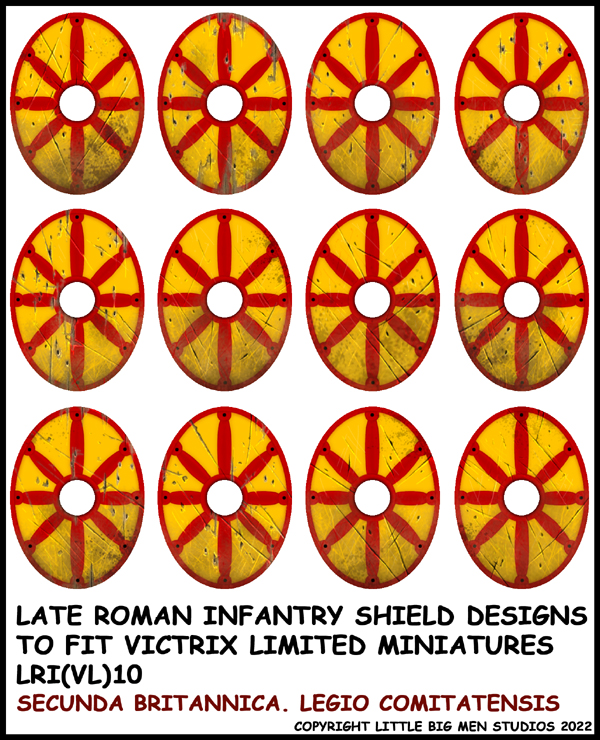 This unit was descended from the old British legion Legio II Augusta based in Caerleon in Wales. The were redeployed to the Gallic provinces during the Late Roman period to deal with the turmoil of the later empire. 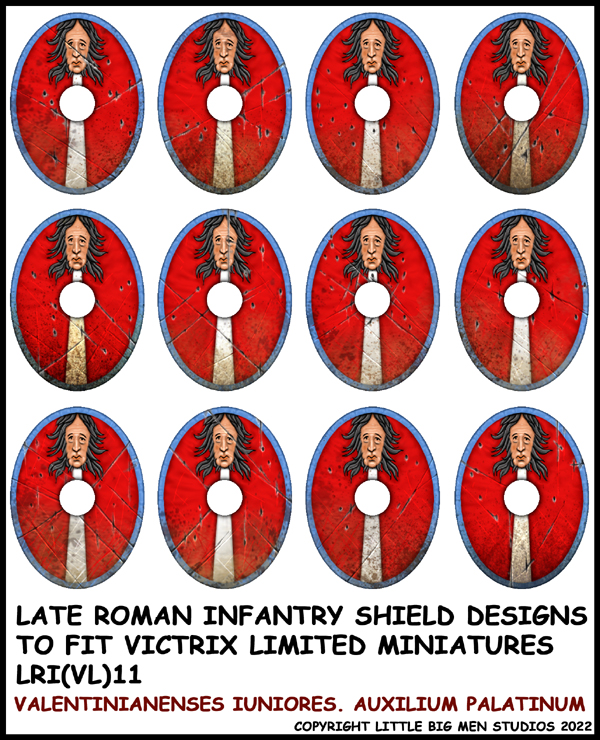 These were stationed in Gaul as part of the largest western field army. 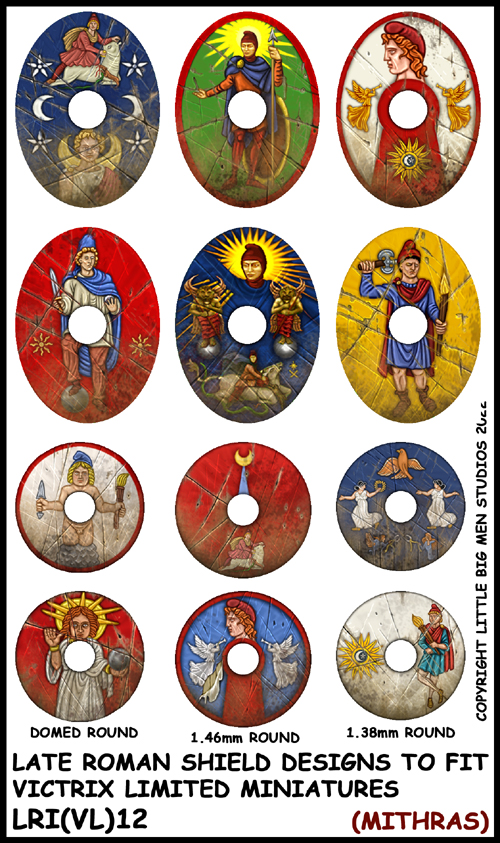 These designs represent images of the god Mithras. Mithras was a great favourite of soldiers and was a religion that spread from the Eastern half of the empire to create devotees throughout the west and even Britain. These designs would work well as a bodyguard unit or used by officers and champions in other units.

These shield designs represent the early Christian chi rho symbol and Celtic influences with a smattering of late Roman. The Romans pulled out of Britain in the 5th century AD but their influence continued with the local garrison troops left behind who were a mixture of indigenous British and settlers from the empire who did not leave. 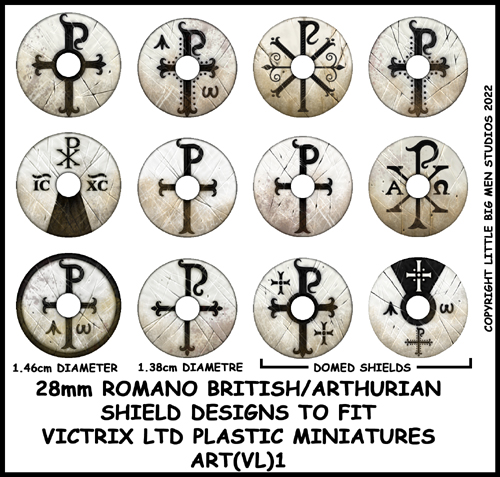 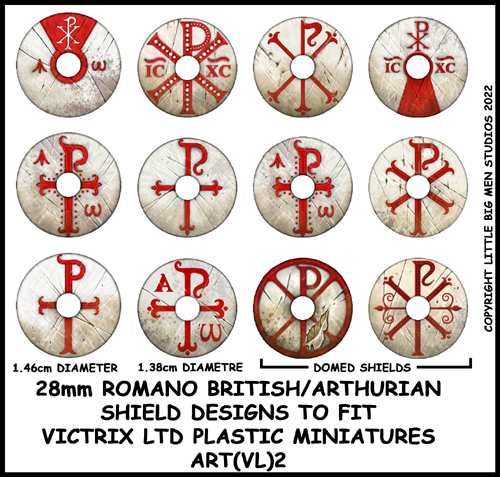 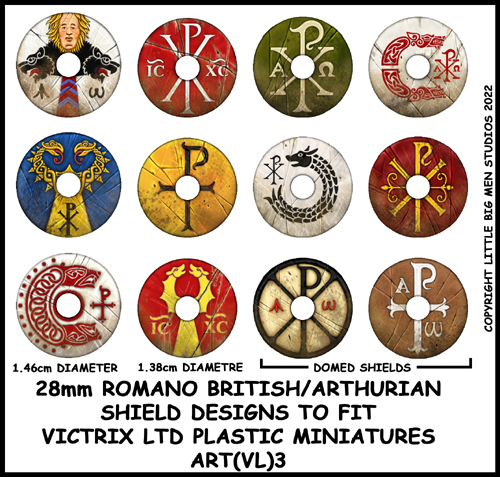 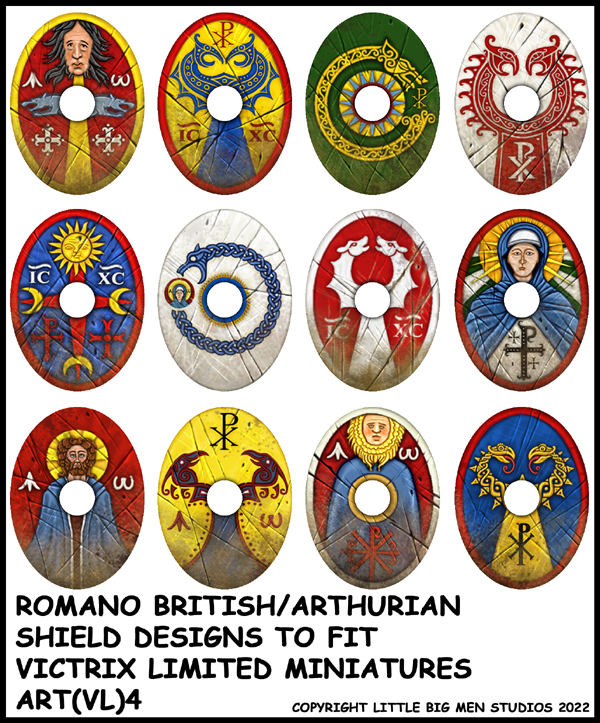 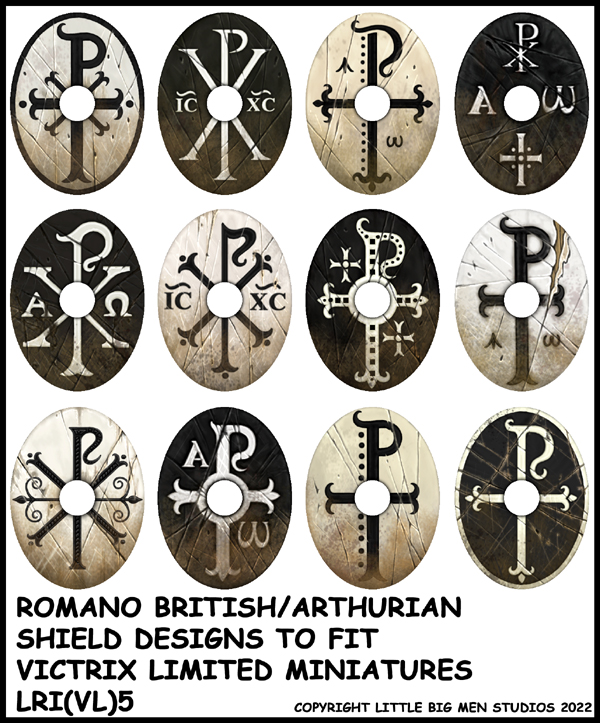 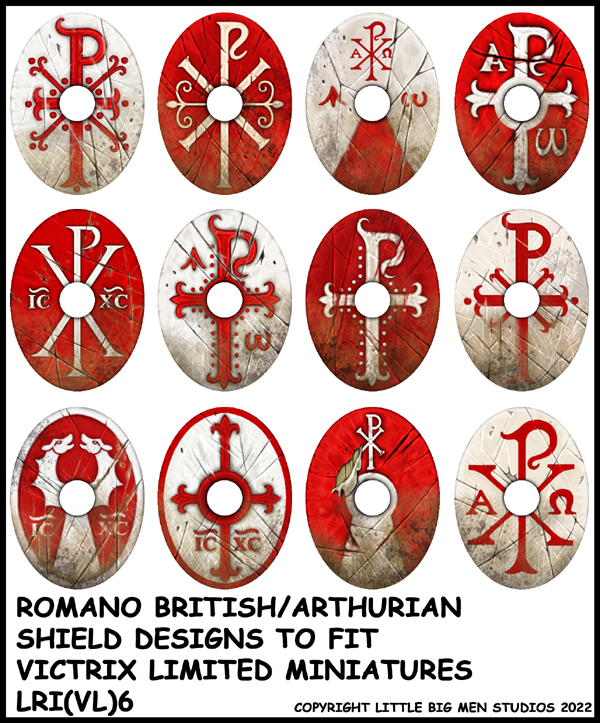 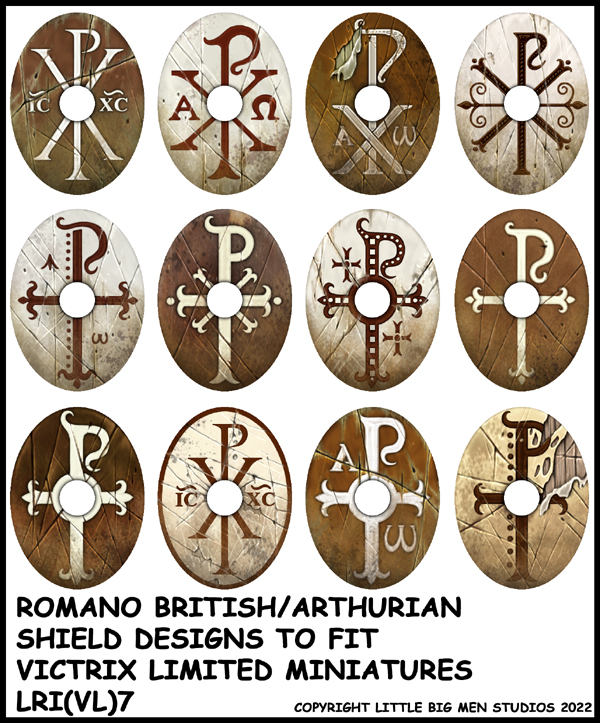 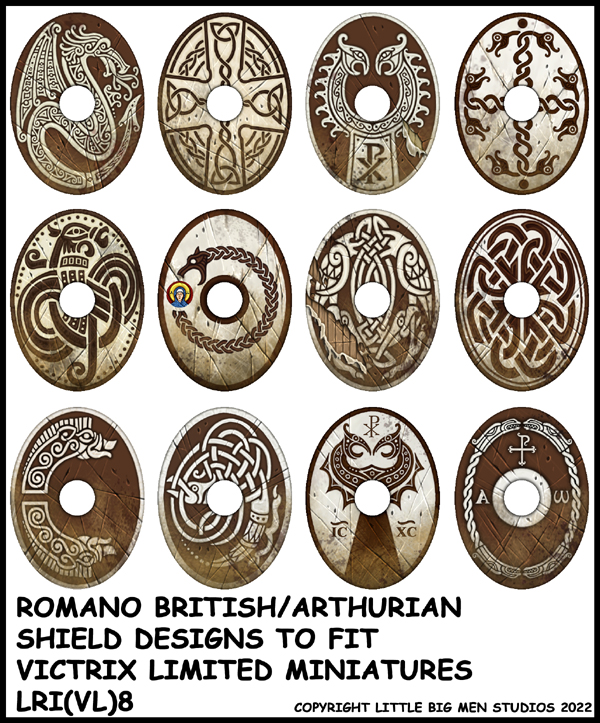 These Chi Rho designs depict the Christian nature of the eastern half of the Late Roman Empire or Early Byzantines. You could also use these designs for Romano British regular units. You can also use Late Roman sheetsLIR(VL)3 and LIR(VL)7as both these legions survived into the Byzantine era. 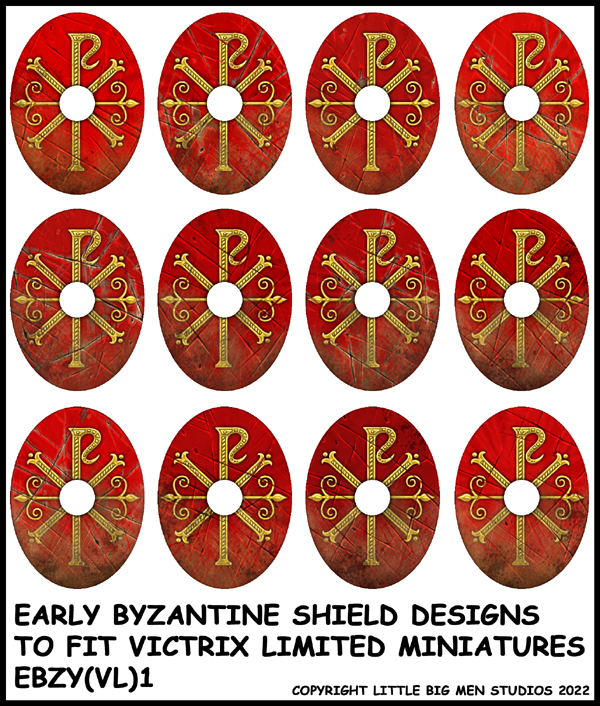 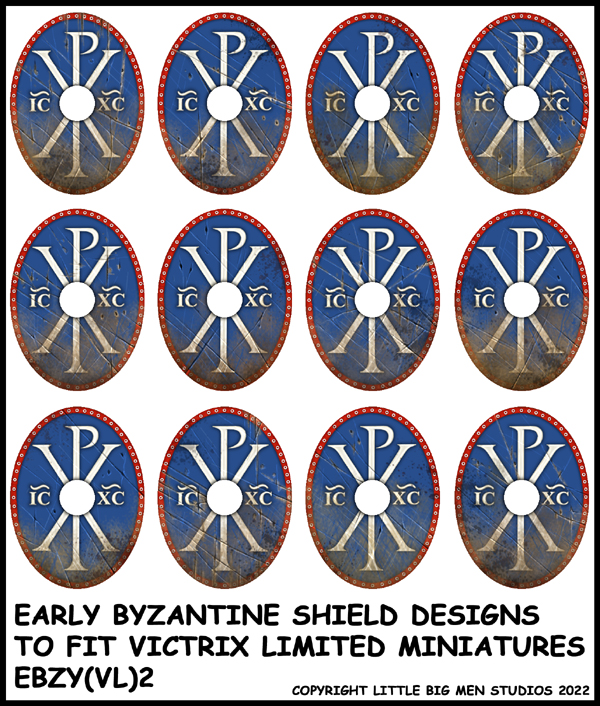 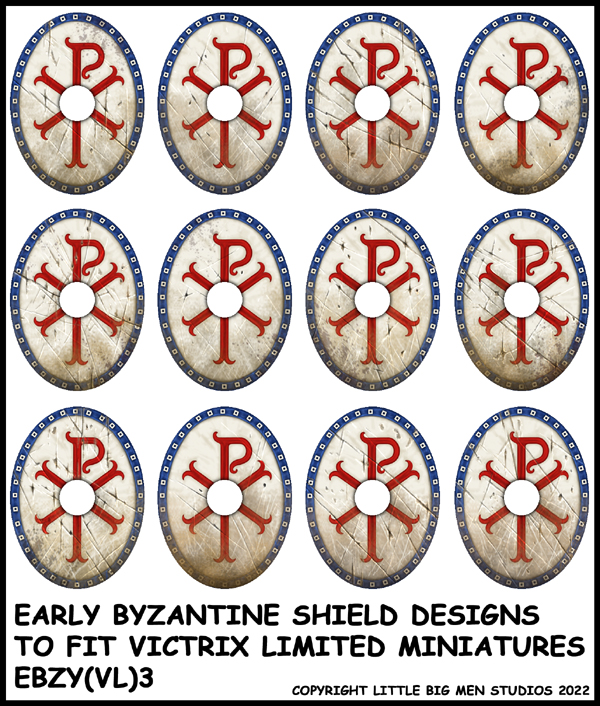 These designs represent the colourful and varied designs of the many Gothic and Germanic tribes that fought against and for the Romans. Oval and round shields were both used, with round being the more common shape. 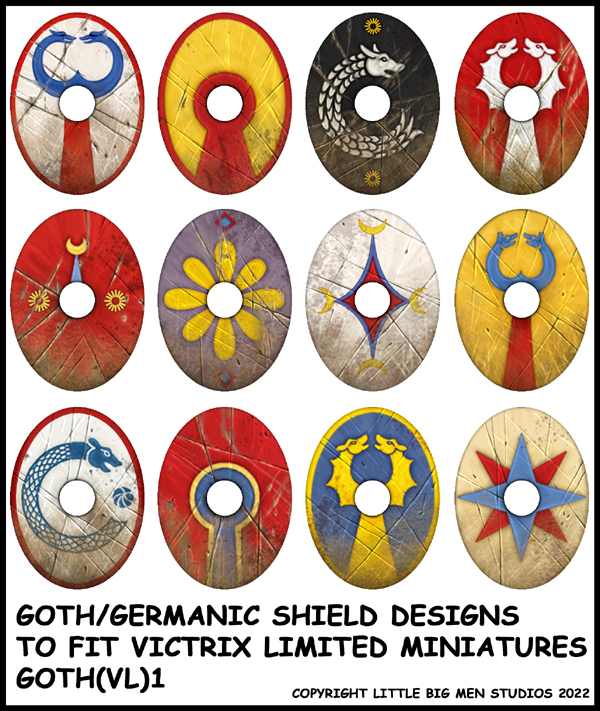 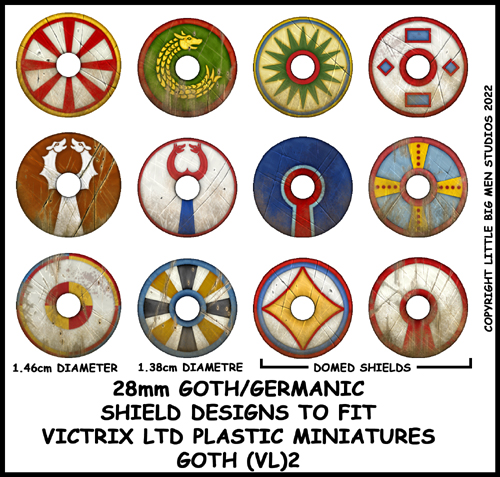 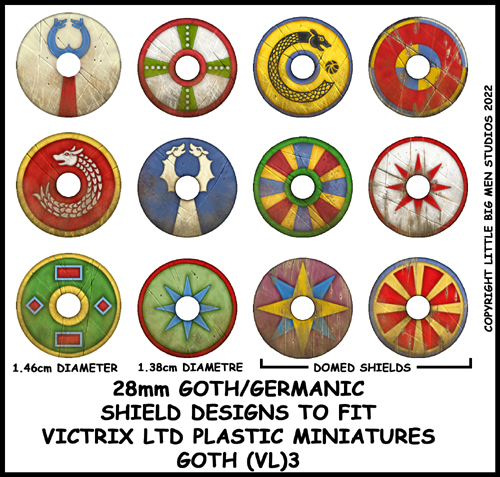 Lovely Late Romans, I’m earnestly hoping you will be selling Late Roman shields separately as you do with your other ranges as I have figures from Foundry etc that I’d like to match with your fantastic looking miniatures and nothing helps more then having the same shields. Please let me know when they become available as I will buy a number of them.

With all of the Late Roman releases coming down the pipeline, might there be some fierce Hunnic horsemen somewhere in the future? ;)

Fabulous range. I’m so looking forward to buying these to use on the Romano British army I intend putting together. Thank you for the preview.

Amazing shield transfers as usual. I was wondering, however, how many miniatures total would be in the set?

I agree with Theodore, especially about the image of Hercules

On closer inspection, Steve has created some other new designs, too! I eat some of my initial reaction! I am a great admirer of his work. I know he works incredibly hard to serve the hobby. His standards are invariably high.

I think Steve has done a particularly good job on the Mithras sheet here. These look truly excellent. I really like the inclusion of sun motifs: religiously speaking, the Romans were nothing if not syncretists! If the shields eventually can be bought separately, I will buy several sheets.

Perhaps for the cavalry designs, Steve might consider preparing a sheets of motifs as follows:
A) Sol Invictus (a big, blazing sun would be great);
B) Hercules with his club;
C) Iuppiter with his lightning;
D) Stylised lightning bolts like the image on page29 of d’Amato’s new Osprey on the Roman army in the east.

I hope the new ranges are a great success.

These look good though only the Mithras and last Arthurian sheets are new.

Might ghd shields themselves be available to buy separately? If so, I would by some for my middle imperial Romans.