A breakdown of all the figures for the upcoming Bavarian Infantry.

The set will be a 58 figure set so the customer can make a 36 man march attack unit with command and there will be 16 figures in firing positions plus 4 command and 2 mounted colonels.

The figure below represents the Bavarian infantry from 1809, when they adopted more of a French style kit instead of the slung backpack. We went for the gaiters as they look great, although both gaiters and trousers were worn in the field. 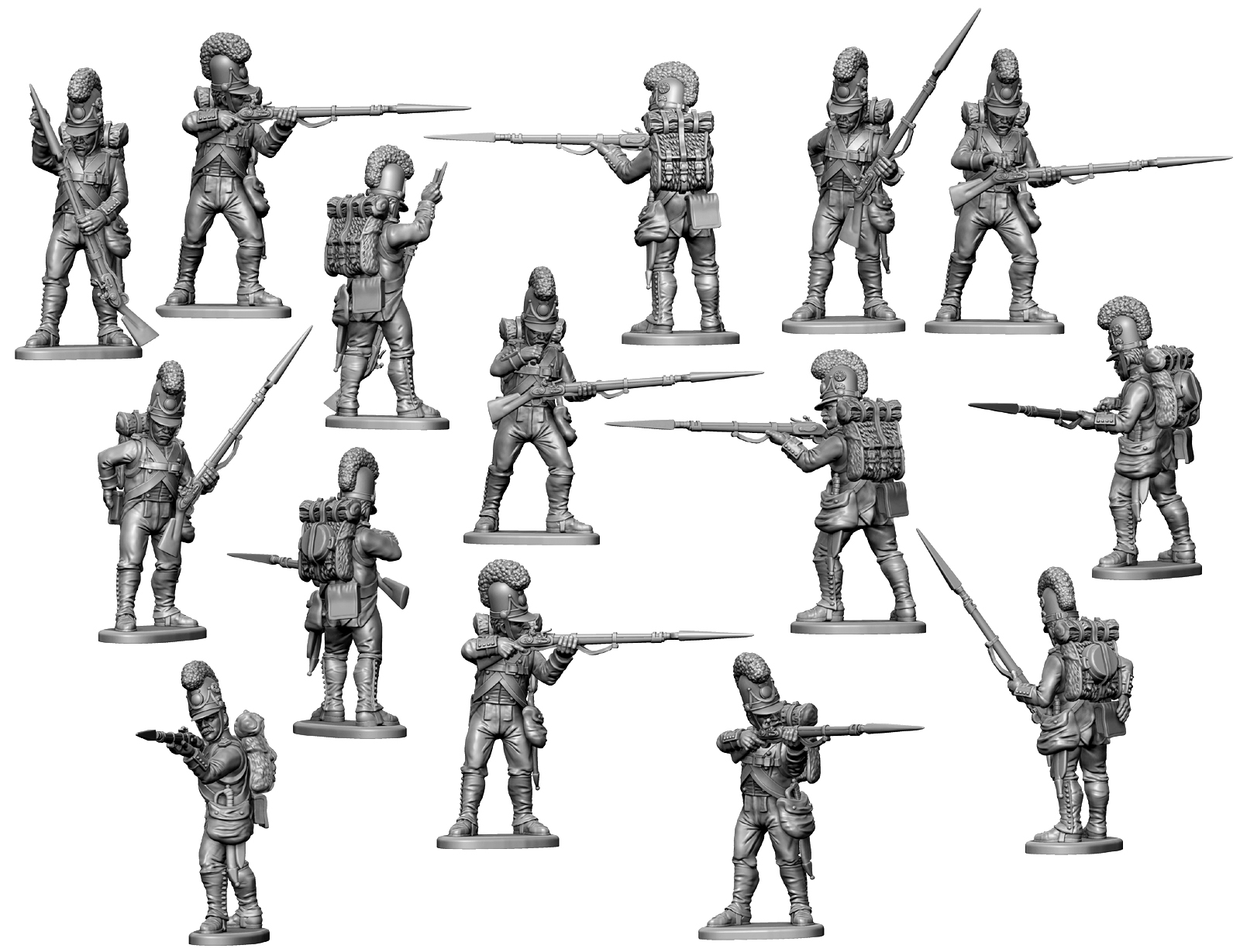 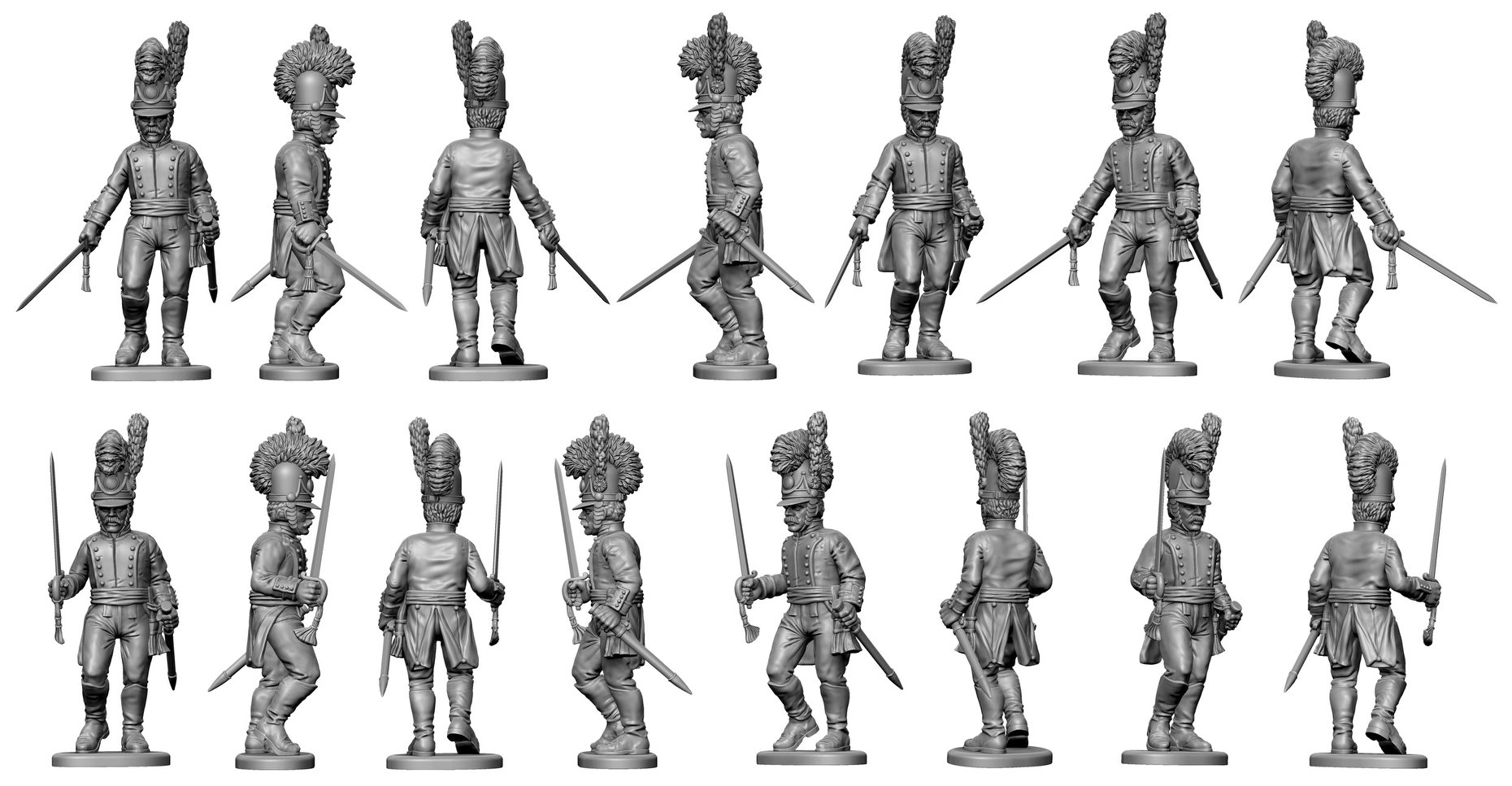 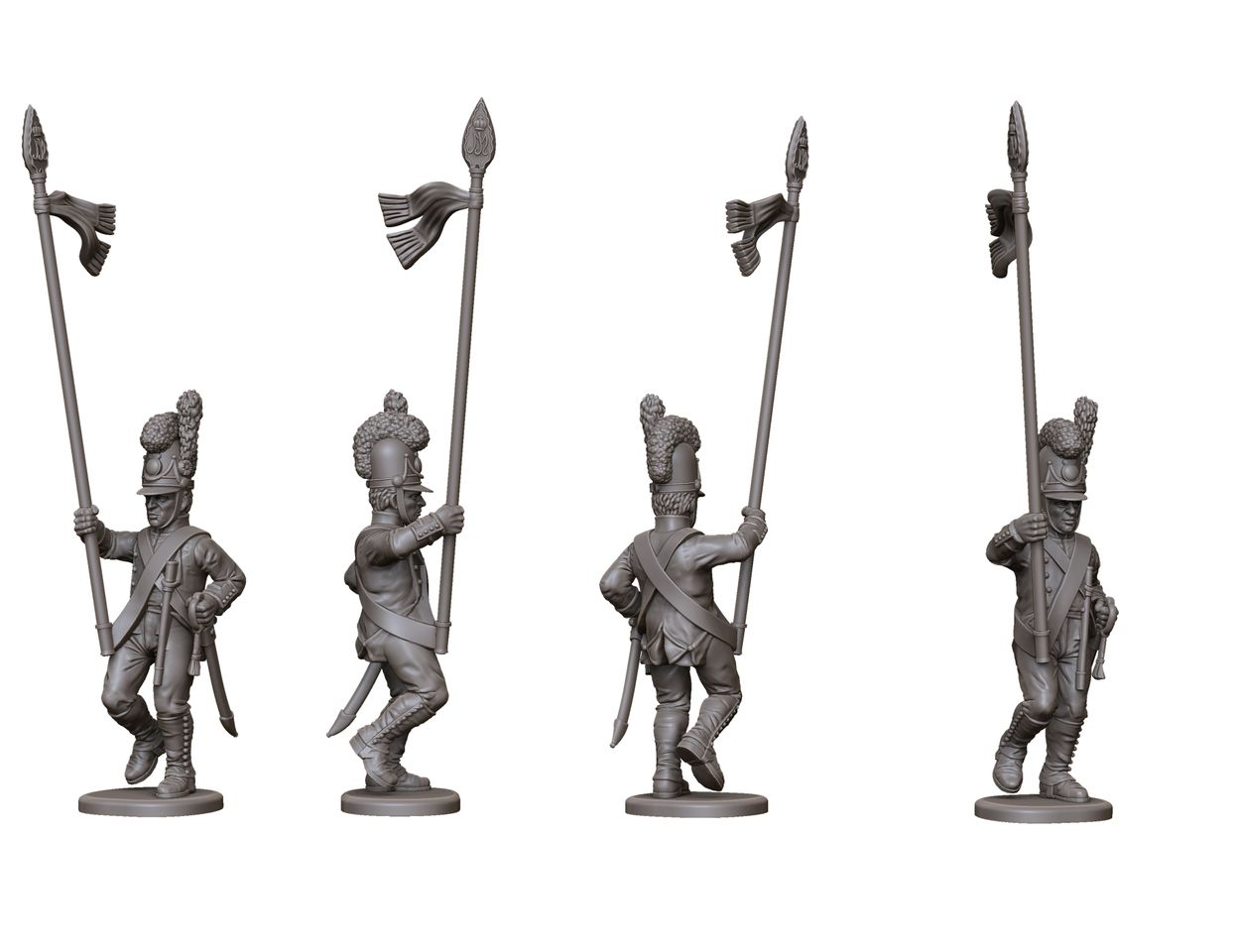 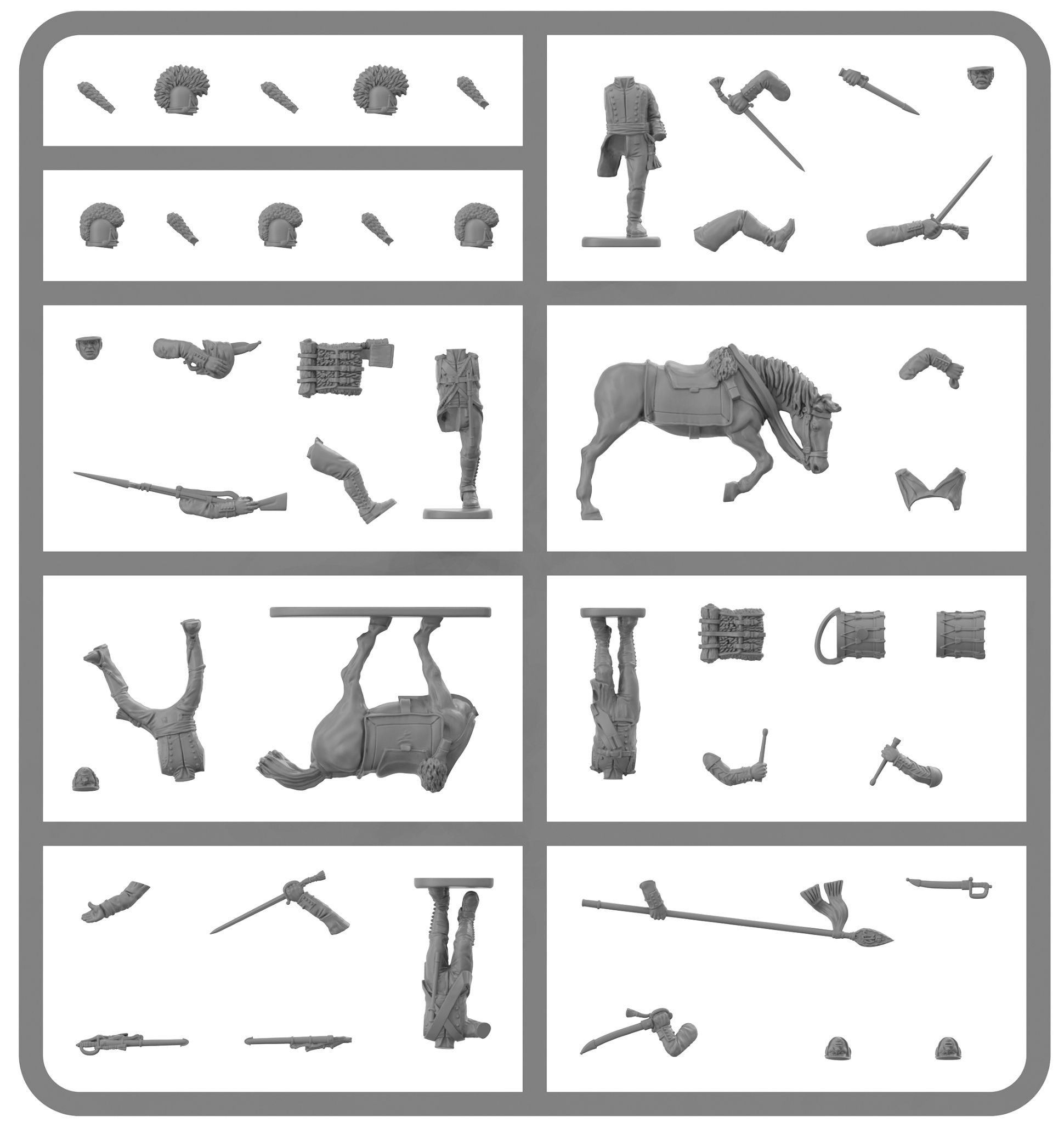 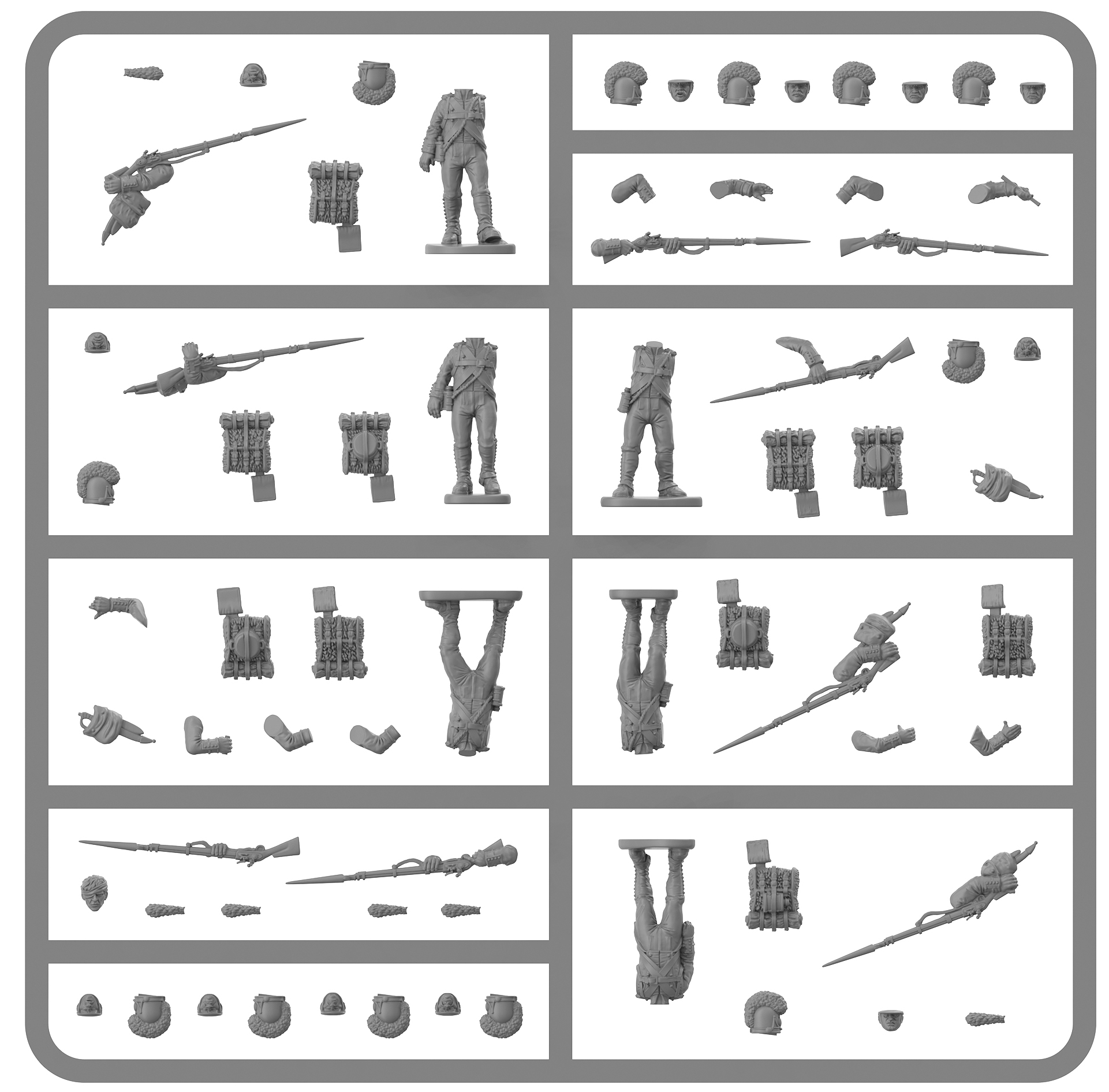 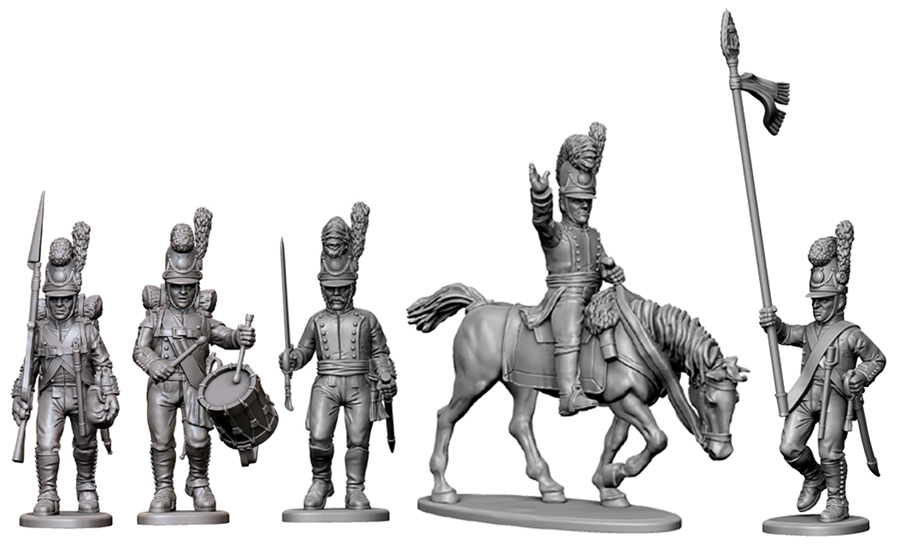 The Bavarians are now in production. Keep checking our facebook page for updates. Alternatively, you can view the existing napoleonic range-here.

End of my message… I could translate freely your French commentaries. This could improve your brand image and would be more in adequation with the quality of your products. This could be done for all 28mm figurines I saw…
Regards

I am working on your Bavarians and it is a pleasure to create different poses. But reading your French translations, I have some difficulties to find my own language ( non existing words as escaramiseurs… that are just «  tirailleurs ». Sure I can not speaker English as you can. On the opposite side,your translator is far from real French. The problem is that some people will be unable to understand . The other problem the use of specific words: a Drummer in French is «  un tambour » same word as for a drum. « Un batteur » will be understood as a rock group musician or a cricket or base-ball player… just a military detail: a standard ( un étendard) is for cavalry and for infantry this is a flag ( un drapeau) and a flag bearer is « un porte-drapeau »… so if you want, I could translater freely

Hi guys
I have recently purchased several boxes of your figures . And in the British flank companies found a nice set of rules that you enclosed. It says on the bottom of the rules and instructions that they can be down loaded free on this web site . However I cannot find anywhere here where I can down load them?? Could you point me in the right direction Please?
Kindest Regards
Gary

How to make Caesar’s German cavalry? Roman Republican Cav + German head swap? Caesar remounted them on Roman horses. Any ideas from the knowledgeable.

I love the look of the Bavarians and have not looked forward so much to a release in my long life, 79 and counting please hurry up LOL
Cheers J. P. Royle

Re: Brenton Coppick comment 21 Oct. Sorry, that was a typo on my part, i should have said Spanish Infantry. I actually have some Victrix British infantry.

What about British Cavalry? We are waiting too long…

As Mossimo asks could a Hornists arm get put in the frame sprue for a Schutzen unit please ? If not can a parts sprue include one

Douglas …..mate ……..they have had the British kits out for years and years . There is Artillery and Highlanders too ! Where are you looking or not looking ?

In the command sprue there is room for an arm holding a Schutzen hornist?

Hi, still REALLY interested in this kit, would love to know when its available. Thank you!

I don’t currently collect Bavarians but these look too good to resist. (Like all the upcoming Napoleonics!) How about some British infantry?