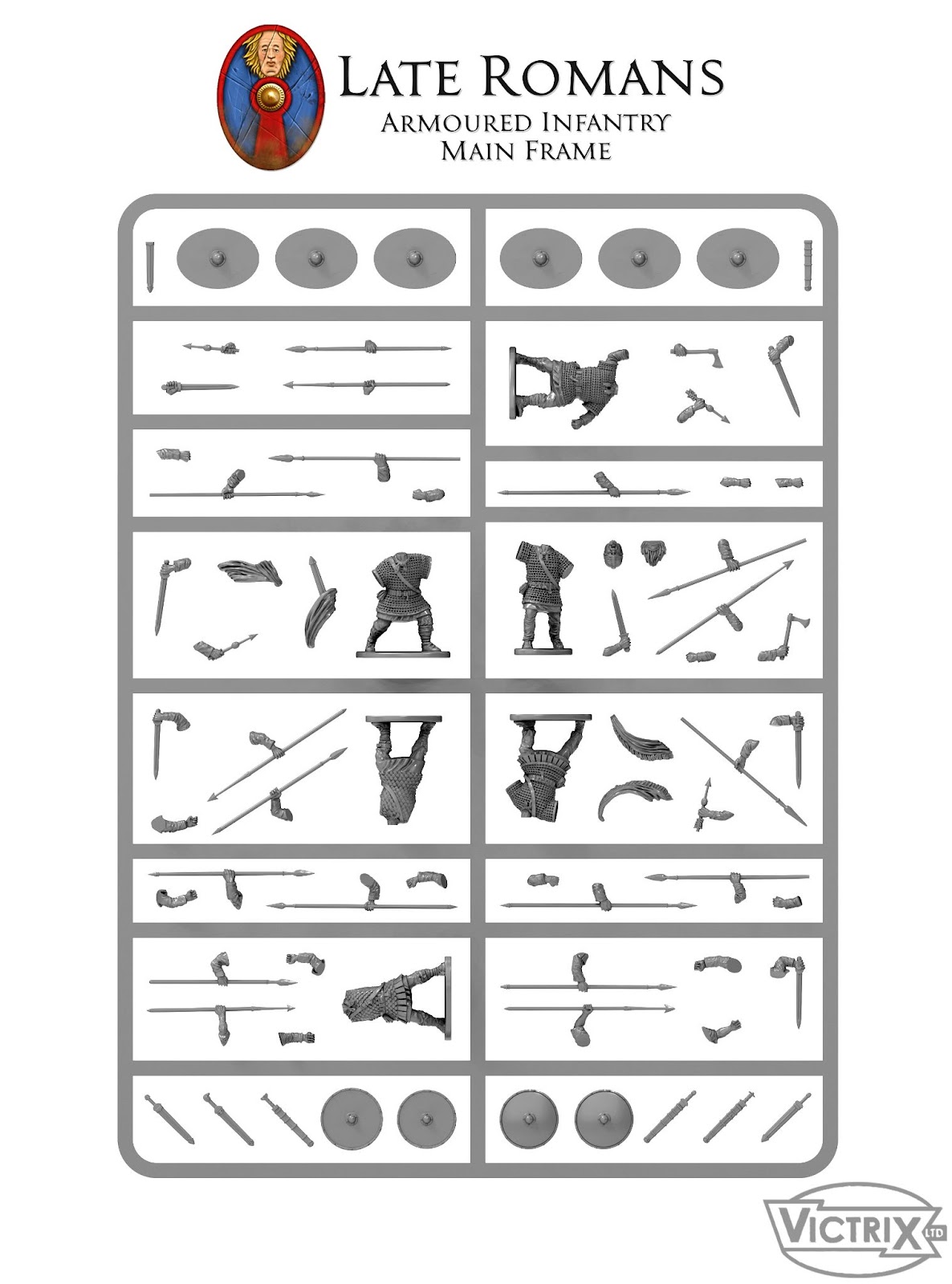 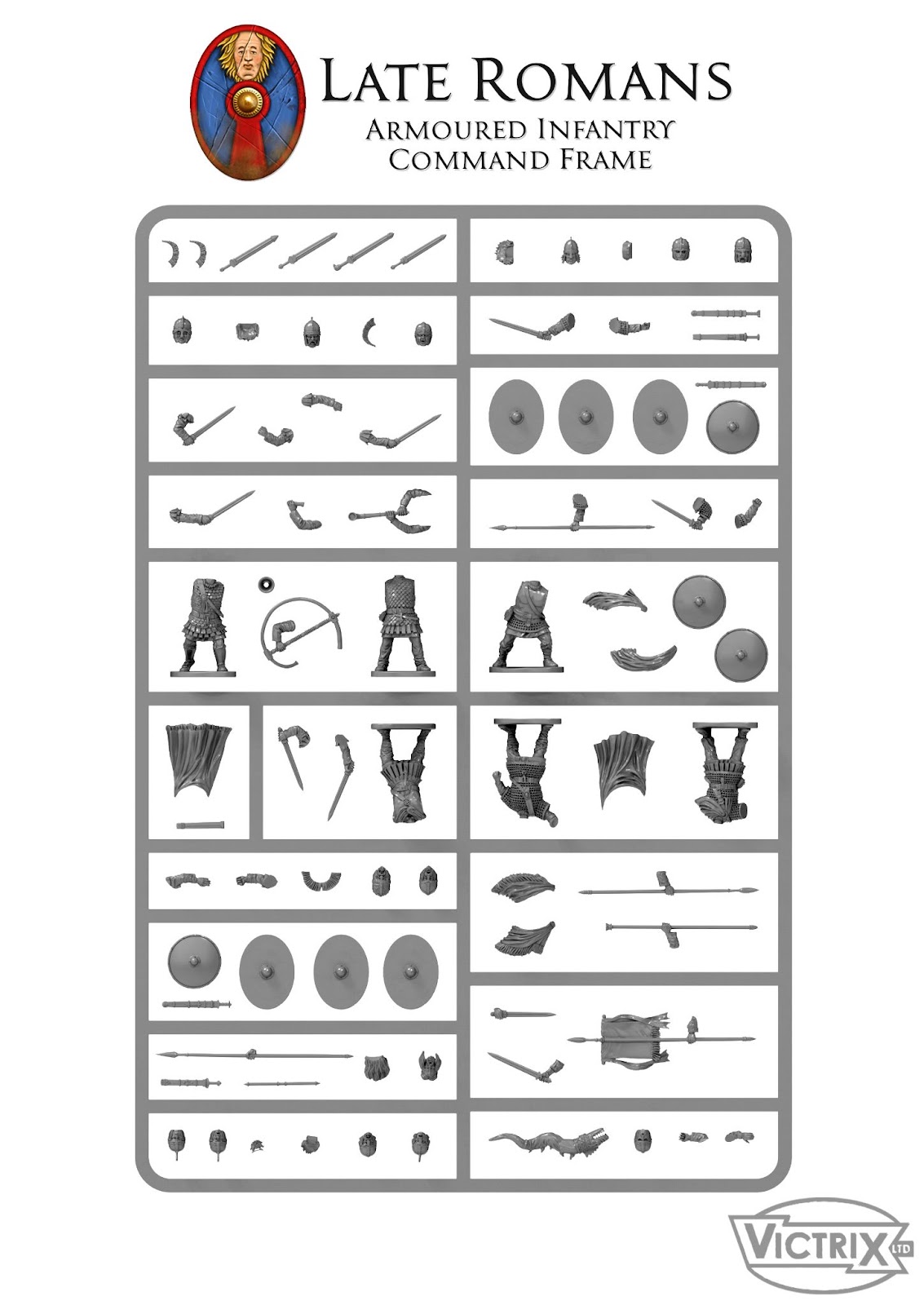 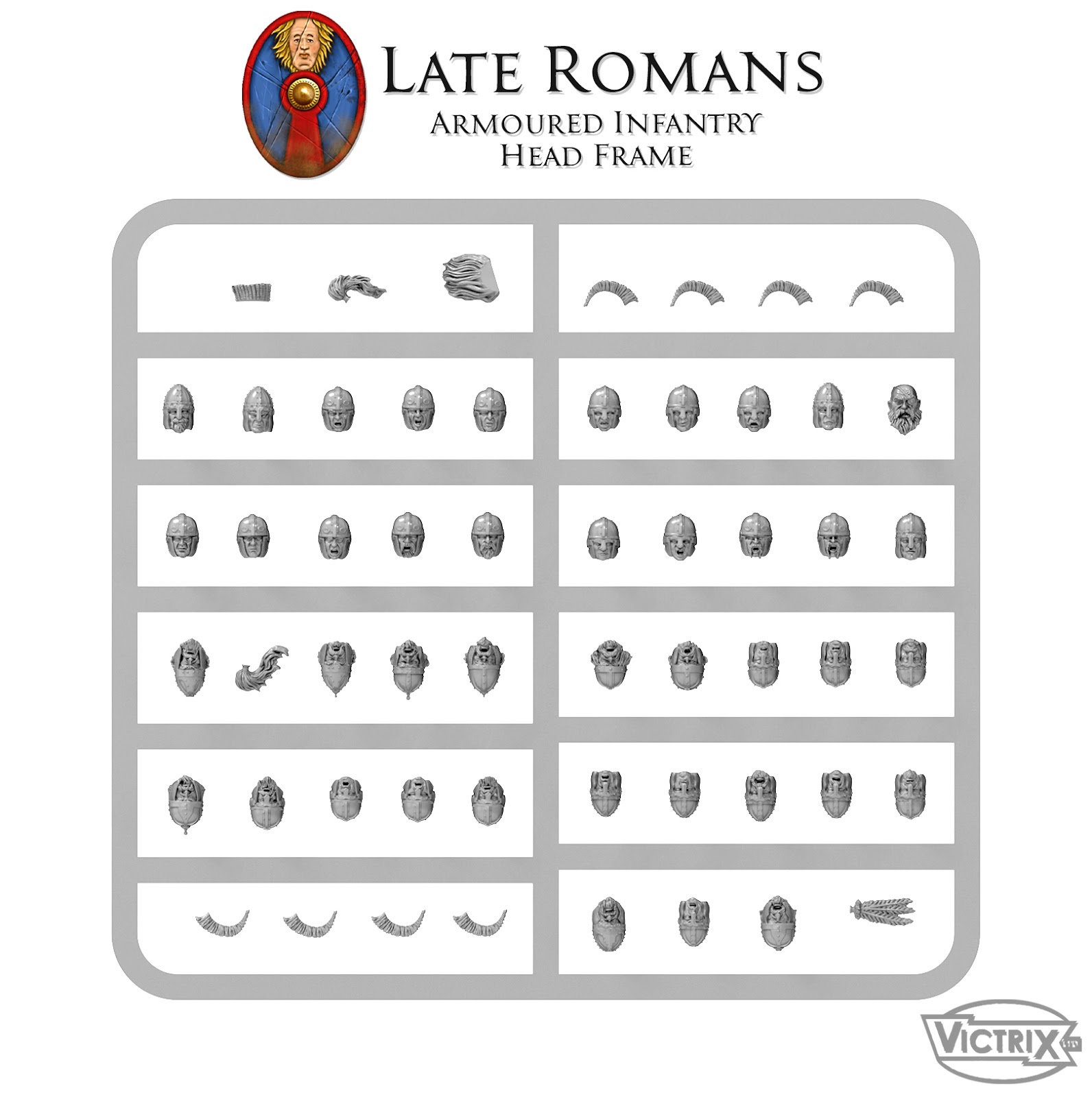 Here we have some renders of the first Late Roman legionary in mail. The render is showing just a few of the numerous head and arm options that will be included in this new set.

We are going to have figures in mail and a few in scale armour also. There will be a variety of head and optional other parts to make these as Roman, Romano British or Germanic. As we sculpt more figures we will show more of the versatility of this set. It will also come with a full command/character figure frame and you will also be able to cross fertilise the set with the forthcoming unarmoured Late Romans 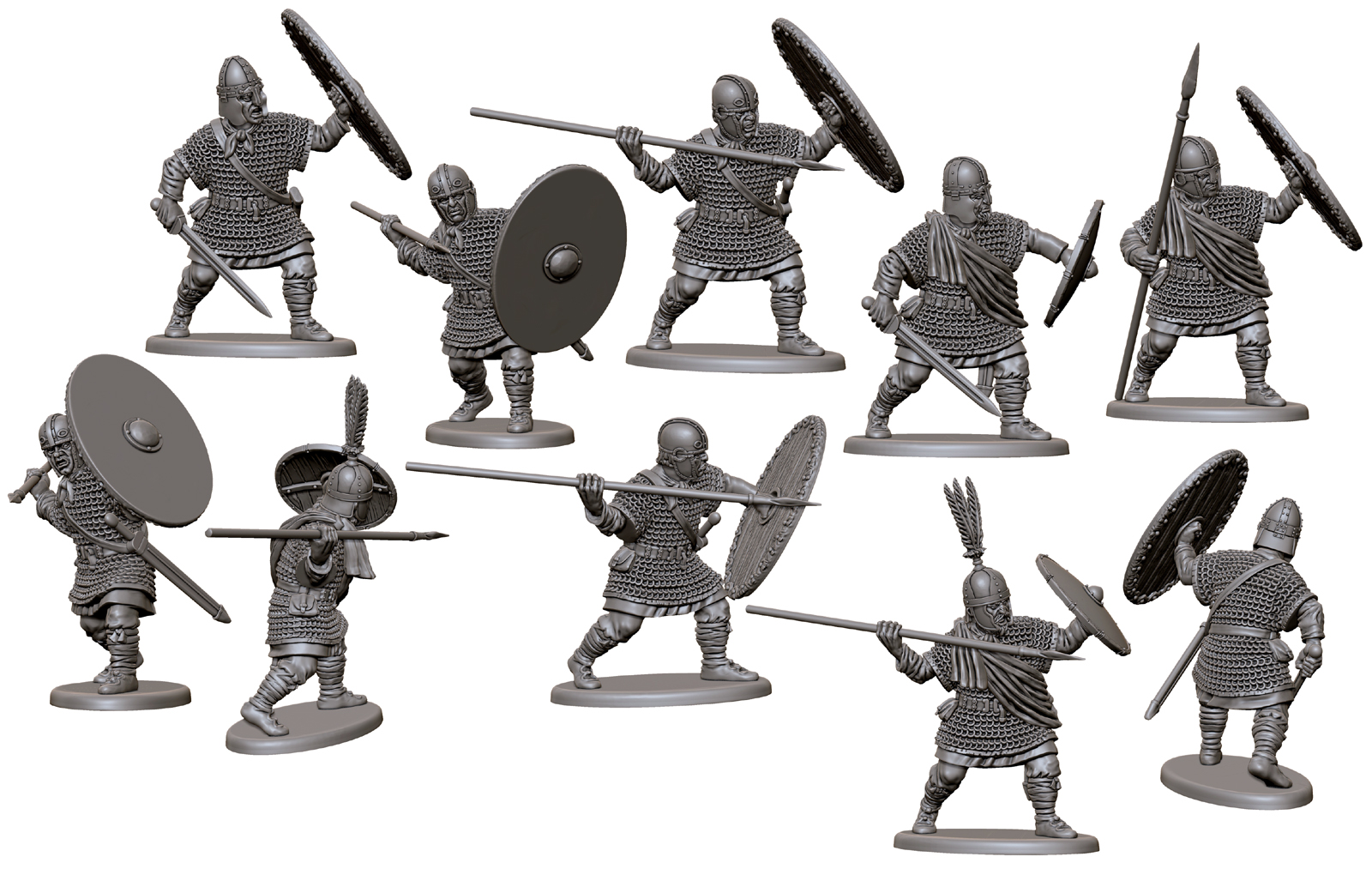 Below are renders of the second armoured Late Roman figure.

There are plenty of head and arm options to make him as a Late Roman, Goth or Romano British.

We are also going to have some figures in scale armour as well as mail in this set plus full command/personality figure frames.

Once we have done the armoured infantry we will move on to the Late Roman cavalry.

Here are renders of armoured Late Roman infantryman 3.  There are numerous head variants (these are just a few samples) to make varied Roman heads and also Goth/Germanic and Romano British. 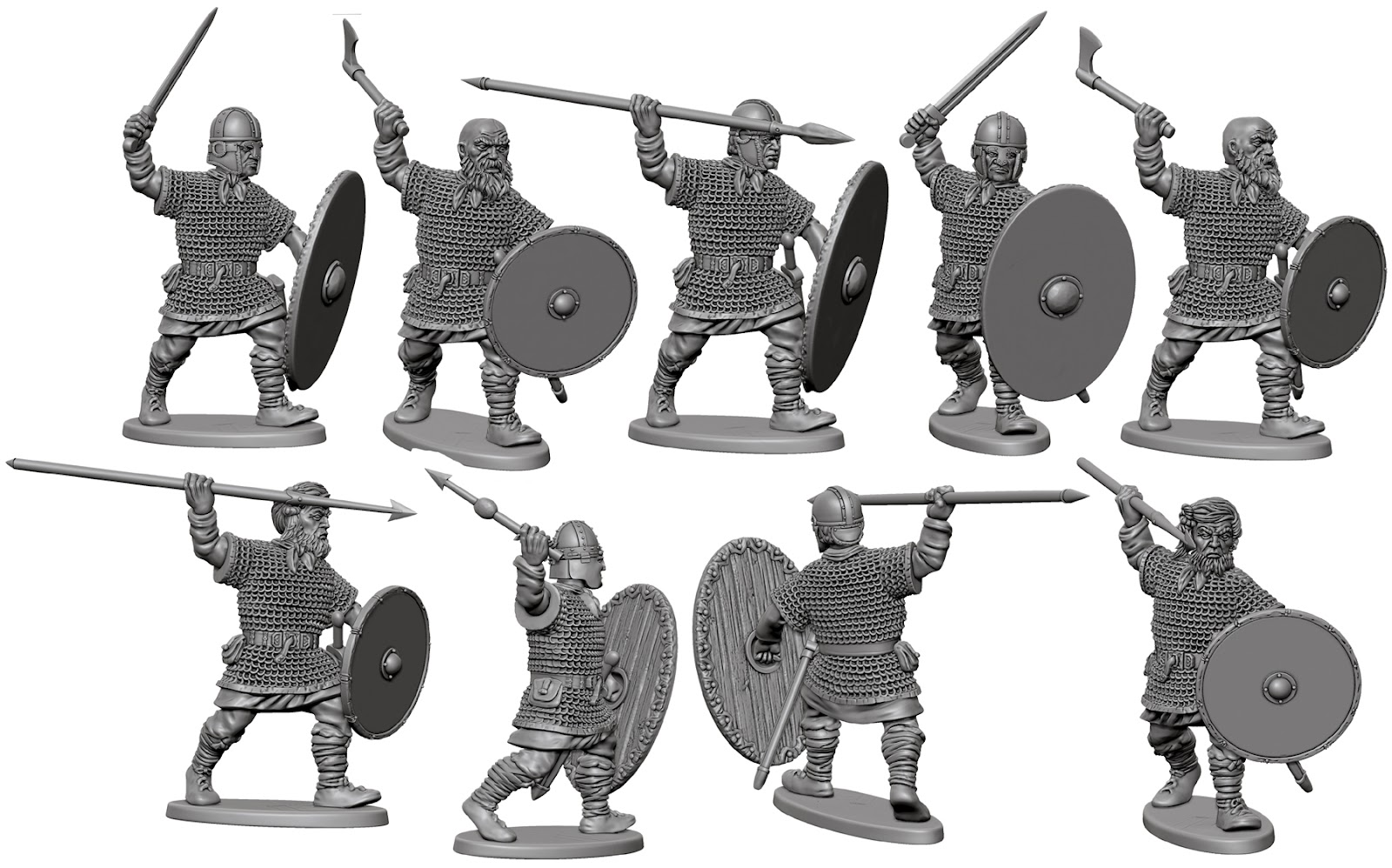 Here are the Late Roman armoured infantry figures 4 and 5. These are showing more of a selection of Goth/Germanic helmet heads as this set will be versatile enough to depict Late Roman infantry, Goth and Romano British.

You can see from the renders that as well as Mail we are now adding some figures in scale armour to the set. The 6th figure is being worked on now which is in scale armour and then we move on to the command figures. 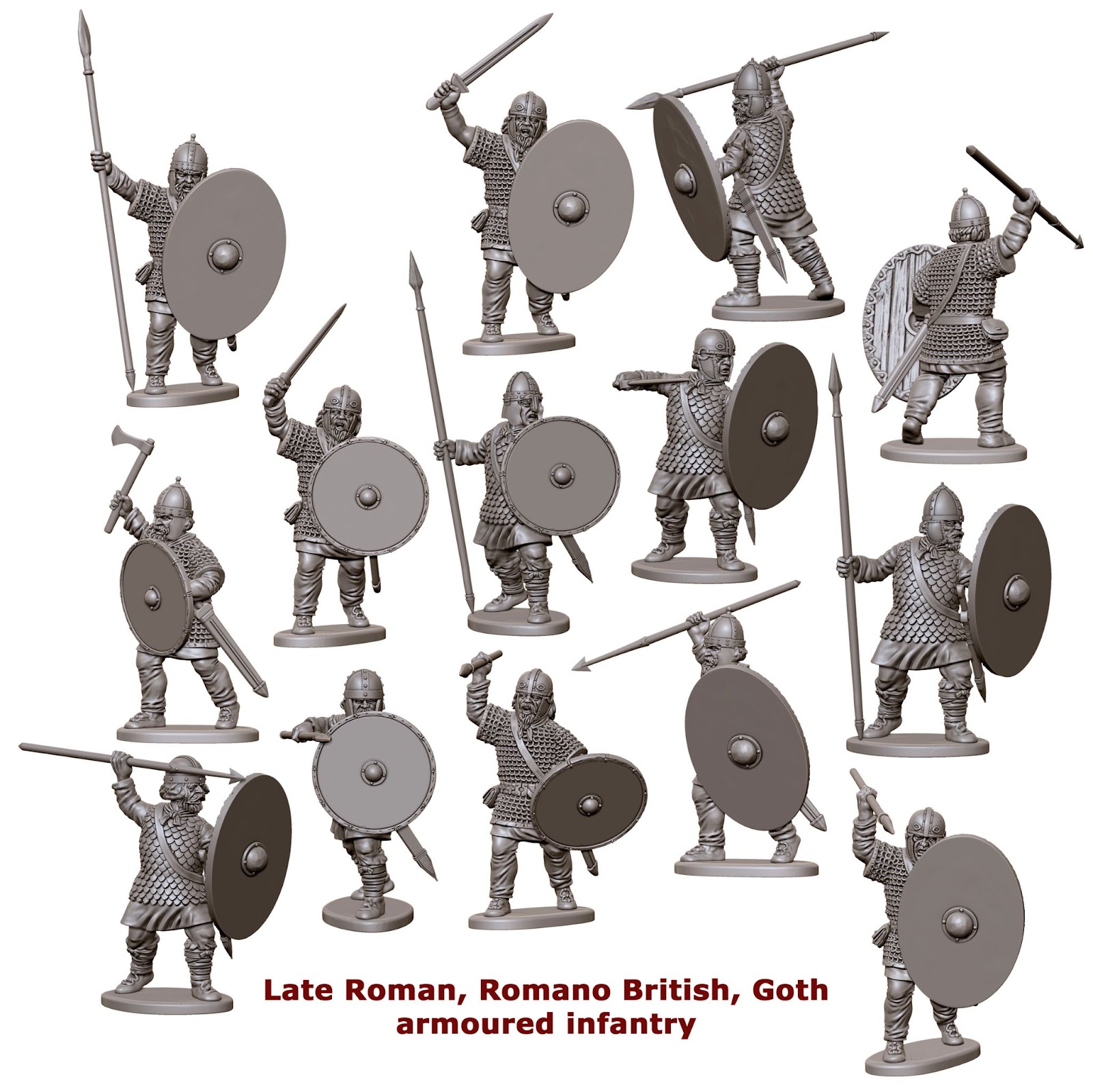 The 6th armoured Late Roman figure is now done and we have finished the figures for the main frame. On this main frame we have 4 figure in mail and 2 in scale. As well as the various styles of Roman helmets we also have a large selection of Goth/Germanic heads.

We will now make a start on the command frame figures and should have something to show you in a  week or two. These will show a mix of mail, scale and beastplates. 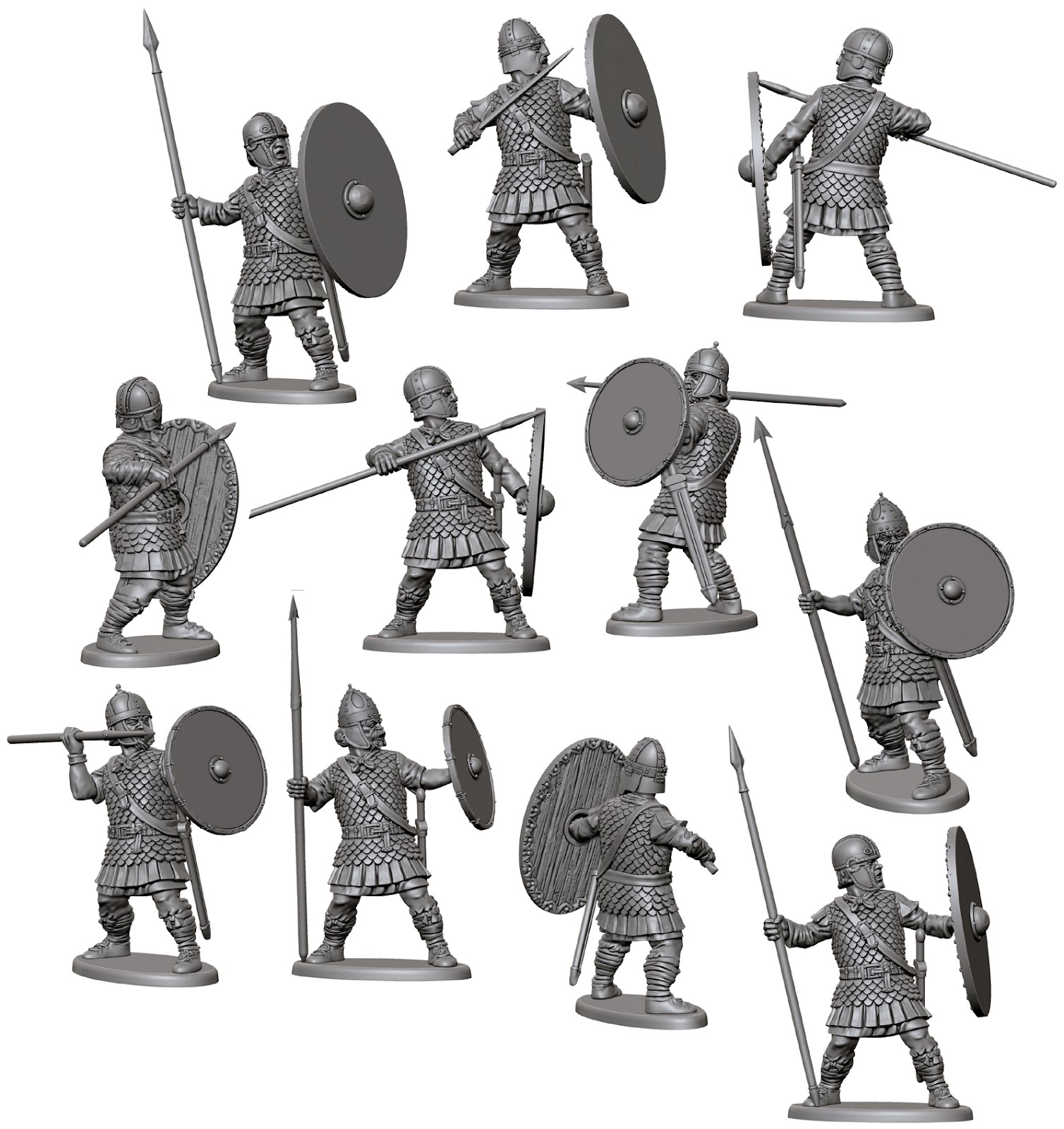 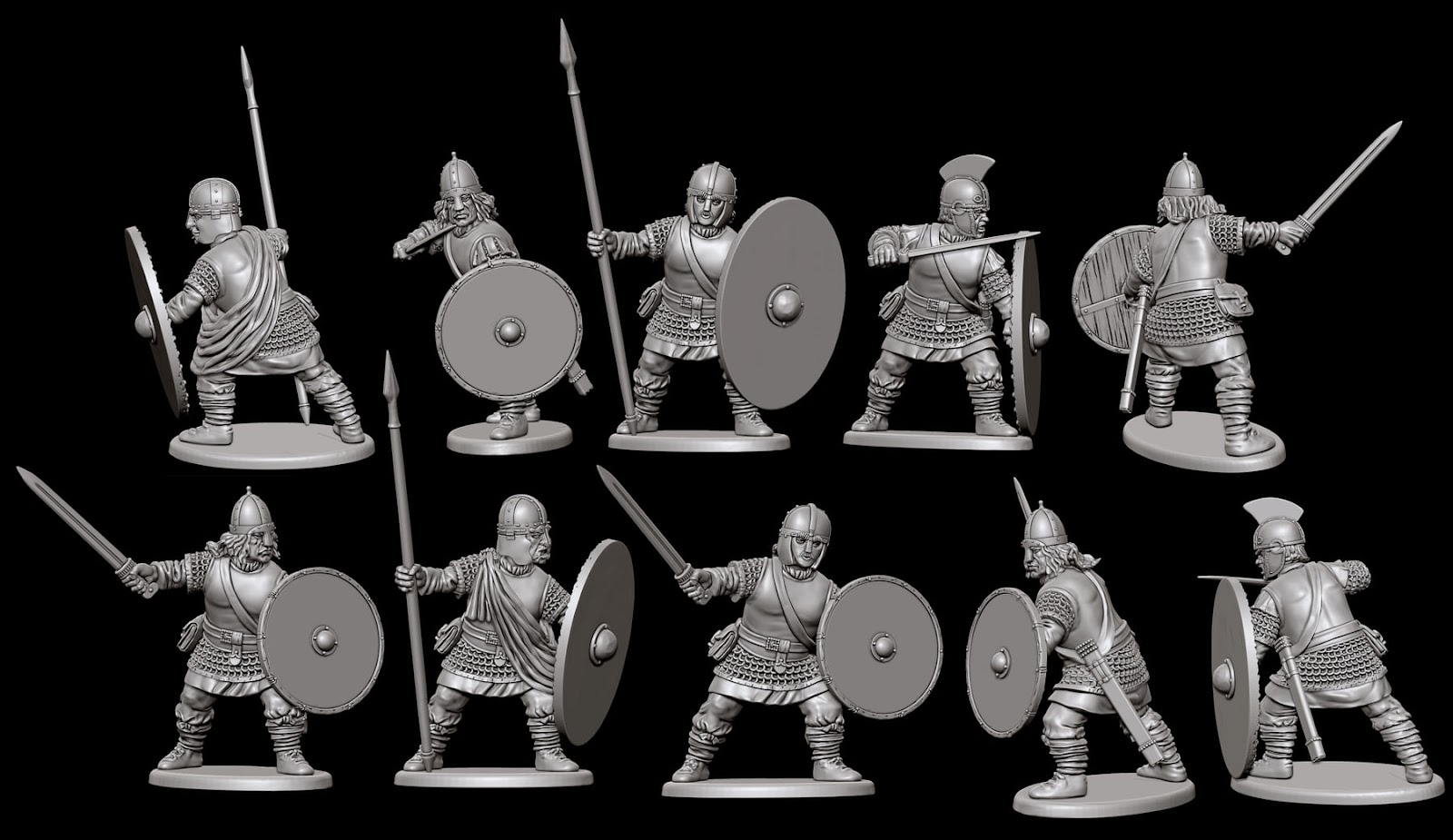 Here the figure is depicted wearing a Roman Centurion helmet and oval shield but we also have options for Romano British, Goth and we have also added an early Saxon style helmet with face mask. A lot of this new Late Roman range we are working on can easily be used for the Saxon invasion of Britain during the 5th and 6th Centuries. We will add a few more options to this set but will follow up with specific early Saxon figure sets.

He wears a softish leather cuirass over his mail. Late Roman infantry wore this under the mail or sometimes over the top.

The cloak is an optional piece to give him a British feel. When painting the figures, you can add some plaid style clothing which will really give them that Romano British look.

Here we have some renders of the second Late Roman command figure from our upcoming armoured Late Roman set.

The figure has the options to be a standard bearer, Centurion, Chieftain or spearman. He has head options for Late Roman, Goth, Romano British or Early Saxon. Note the metal face mask applied to a Roman helmet on the end figure with Vexilum.

Above we have the renders for the 3rd and 4th Armoured Late Roman command figures!

Here you can see a musician with two trumpet options who, with the appropriate head change, can also be built as a Goth Noble warrior or Romano British warrior.

We also have a more senior officer wearing a muscled Cuirass waving his men forward or deflecting blows in combat with his raised shield.

With the huge selection of heads, arms and extras we have in this set, this first figure can be used as a Roman Centurion, Standard bearer, ordinary legionary, Germanic warrior or chieftain or Romano British warrior or warlord.

Any heads can be used on this figure but we did a specific head with long hair and a crown to give a suitable Arthur look to this figure. We could not resist the temptation to do an Arthur! The figure would also easily work as an Irish, Welsh or Scots chieftain.

Two of these figures are wearing the commonly worn scale armour and has greaves strapped to his lower legs. Here he is wearing a Centurion helmet, but as always there are plenty of head and arm options in the set to create a lot more variety.

Just noted the 3 sprue make up of set. 6 main frames is welcomed, two command is logical given 36 infantry. However how many head frames? I have 7 bags of unarmoured infantry, so not short of heads, I would be however short of the helmet crests if only 2 head frames, so 36 infantry, 20 crests (2×2 on command and 2 x8 on head frames) if 2 head frames are included?
If not will be on look out for crests guys!

I thought you were going to make scorpions and ballista catapults for the roman army sets?

Is there any update on the release of these? Would love to add them to my Arthurian army!

How many head frames?

Hello i write from Greece,your work is very good i expect the late roman(Byzantine)soldiers.Is very detailed and full of moving like all of yours figures.As a figure have so much fine sculpting and if you paint this,the beauty reaching high rank of quality.I don’t have any complaint.I want this job to continue and if all goes well to see and pure blood Byzantine figures,i mean middle Byzantine ages,to include in my large Byzantine army who i start to make from other brands.Keep go on!🇬🇷👍👍👍

Just what I need as opponents to my Saxons!

Tony (13 September) was right – spot on for Rohirrim on foot

Very, very nice! I’m looking for something just like this to add to Middle Earth armies!

Nice! Time to revamp my Arthurian armies.
Any ideas on release dates?
Will there be unarmoured infantry as well?
Will cavalry be released?
Will there be artillery?
So looking forward to getting my hands on these!

Very happy to see this release! Any chance you will include throwing darts?

They look great. Can’t wait to add they to my collection.

Please notify me when this set in stock.

Very much looking forward to these. I just started my late Roman army build, so the timing is fantastic.

I am so excited to grab a box or two of these. Hopefully they go live soon.

Looking forward to these. These are just what I need. I’m assuming Cavalry will follow along shortly? I do hope so.

As H asked earlier can anyone say when these and other late Roman sets are coming out ?? I am looking to invest heavily into a line in this era very soon Cheers

Superb. Hoping they’re a similar size match for all the Footsore Late Romans I bought before X-mas last year?

These look pretty cool. Wonder how that presumably optional cloak thing is going to work?

Looks great, however the soldiers wielding the sword have a handguard that is incorrectly fitted to the sword. It should be turrned 180 °…

I can’t wait for these sets to start coming out! Is there any ETA on when the first sets will be released?