This will be a 12 figure set with 2 x frames of 6 riders and 3 x frames of 4 horses. We will put quite a few shield options on the horse frame and aim to add in some long heater shields and some round shields as well as the kite and Adaga shields. Tassels that normally adorn Adarga shields are going to be separate objects so this means you can apply a transfer and then glue the tassels on. Or you can vary whereabouts the tassels are placed, or you can decorate the horse tack with the tassels to make them look more Islamic. Some extra sword scabbards will be done for Islamic variants.

Here we have the renders of Norman cavalry figure 1. He has many head and weapon options and options for kite and round shields. There will be quite a few extra parts in this set so they can be used for many other nations other than Norman cavalry, Spanish, Breton, Franks, Normans in Sicily and Italy and other Europeans and up to the first Crusades. There will be 4 horse positions and 6 rider bodies but plenty of interchangeable heads and weapon arms. 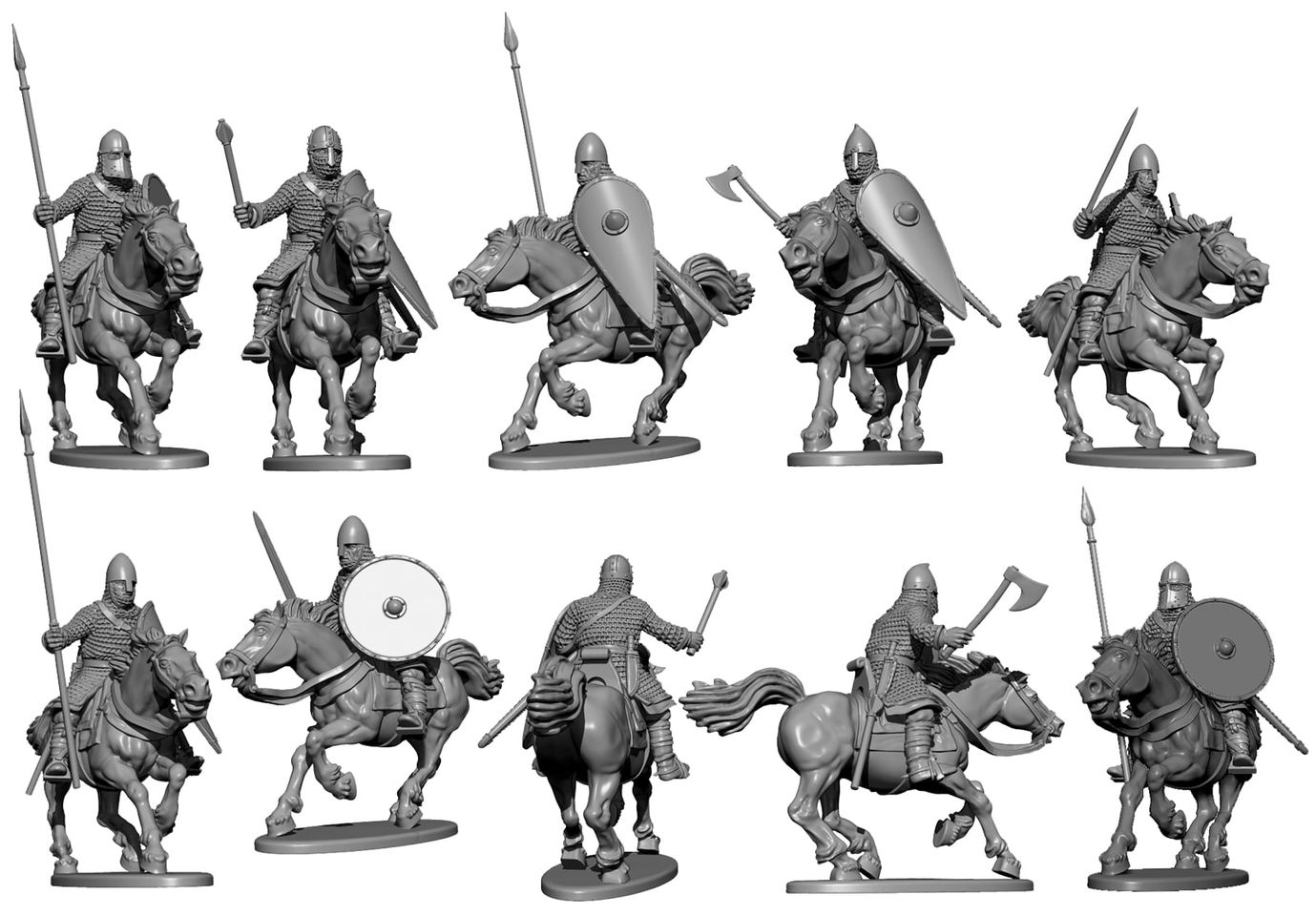 Here are the renders for Norman cavalry figure 2.We have multiple options for these figures so they can be armed with lance, spear, sword or javelins to represent Breton or Spanish cavalry. Round or kite shield options also help extend the versatility of this set.

We do plan on some more shield options and head variants with Arabized headgear to extend the use into the Crusades and Spain and you could possibly even use them Andalusian heavy cavalry with the appropriate helmets and shields.

Here we have some renders of Norman cavalry figure 3. It looks very dynamic and has multiple head and weapon arm variants. We have put a lot of effort into making this set more versatile, so you can use them not just as Normans, but also Spanish and Andalusians. Note the Arabized head with turban and the Adarga shield option often used by the Spanish and their Muslim allies and enemies. 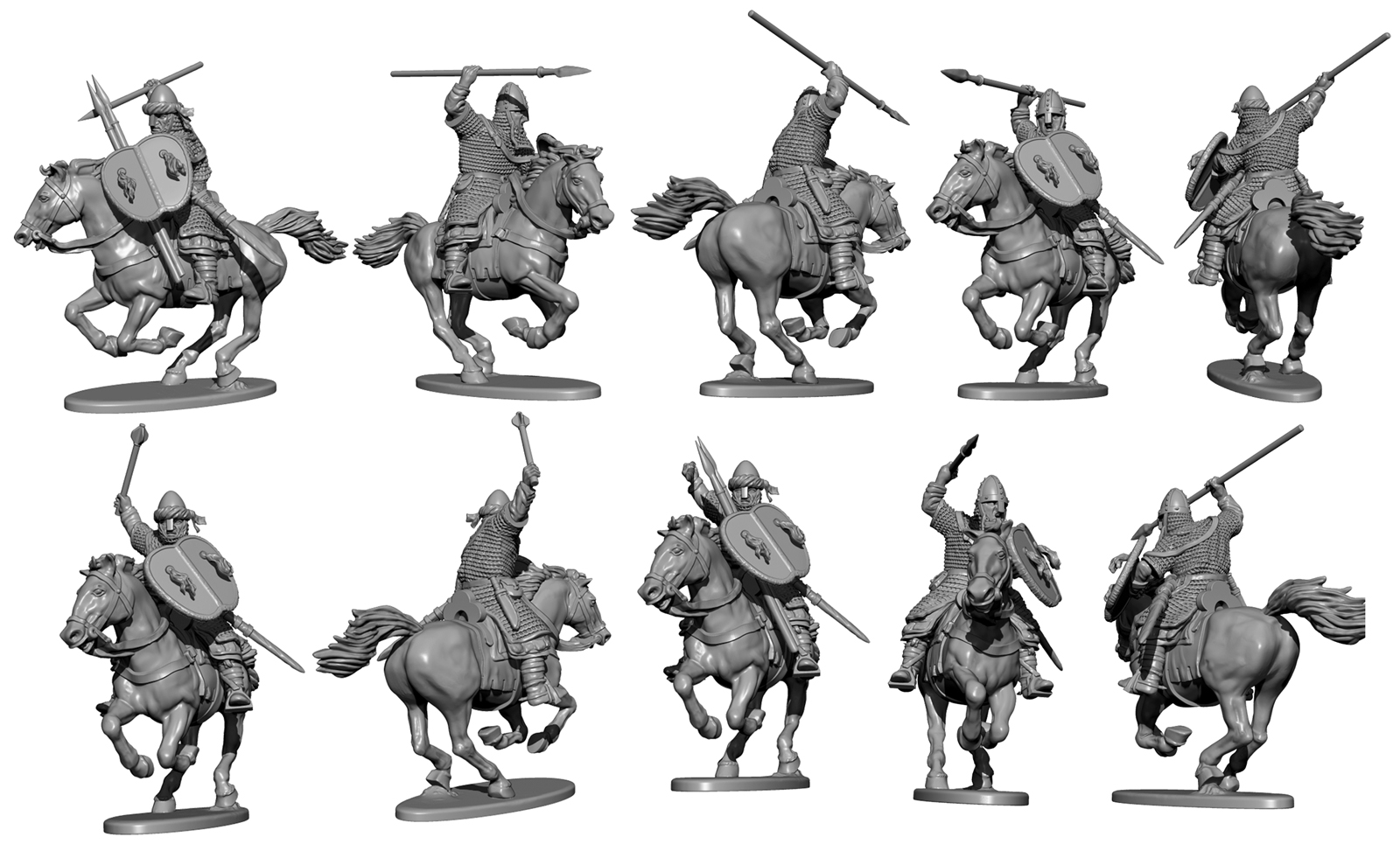 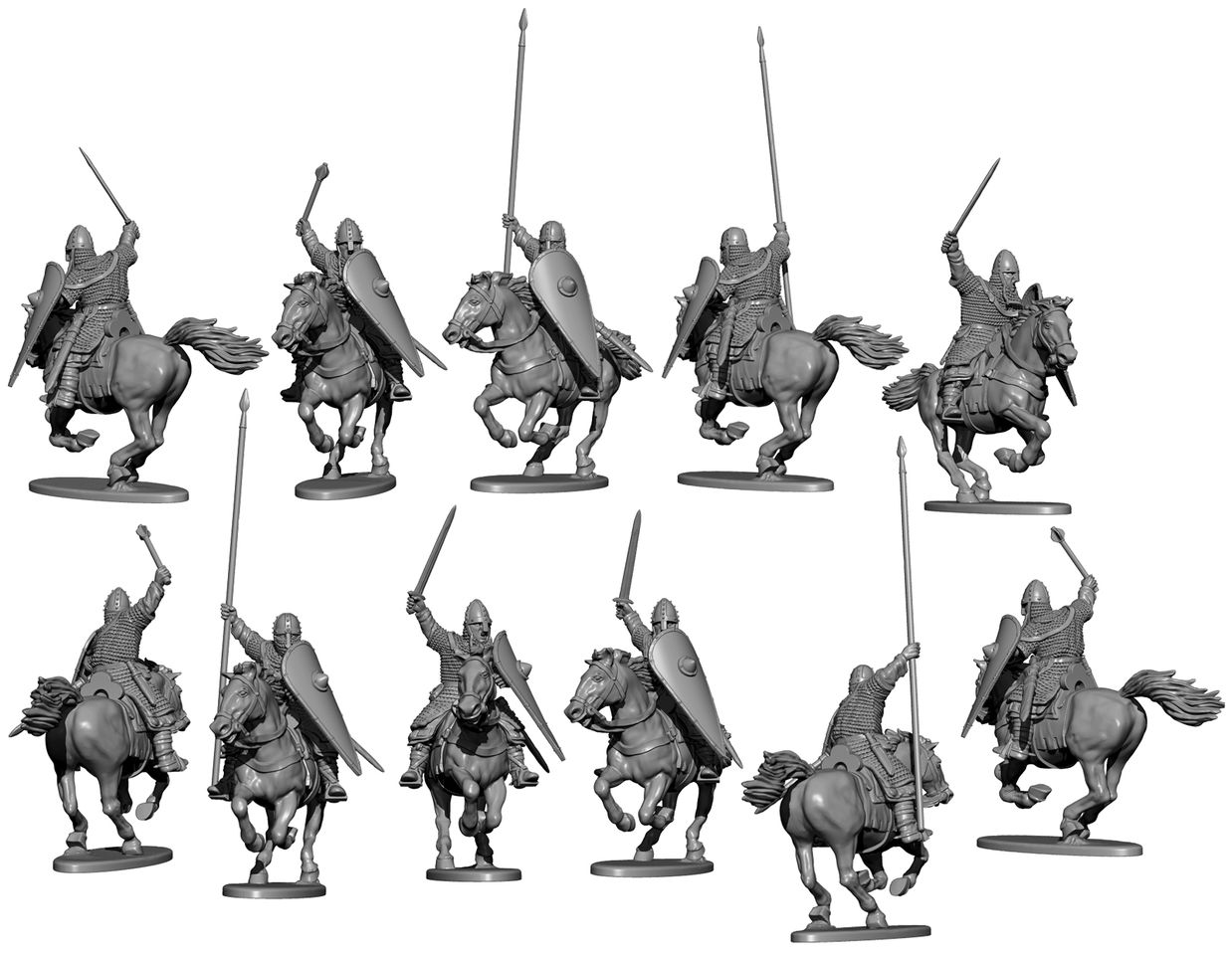 Norman Cavalry figure 4. We are showing the classic Norman and Breton look figures but also showing some of the head and shield options to be included so you can make Spanish and Andalusian cavalry (and lots more besides). 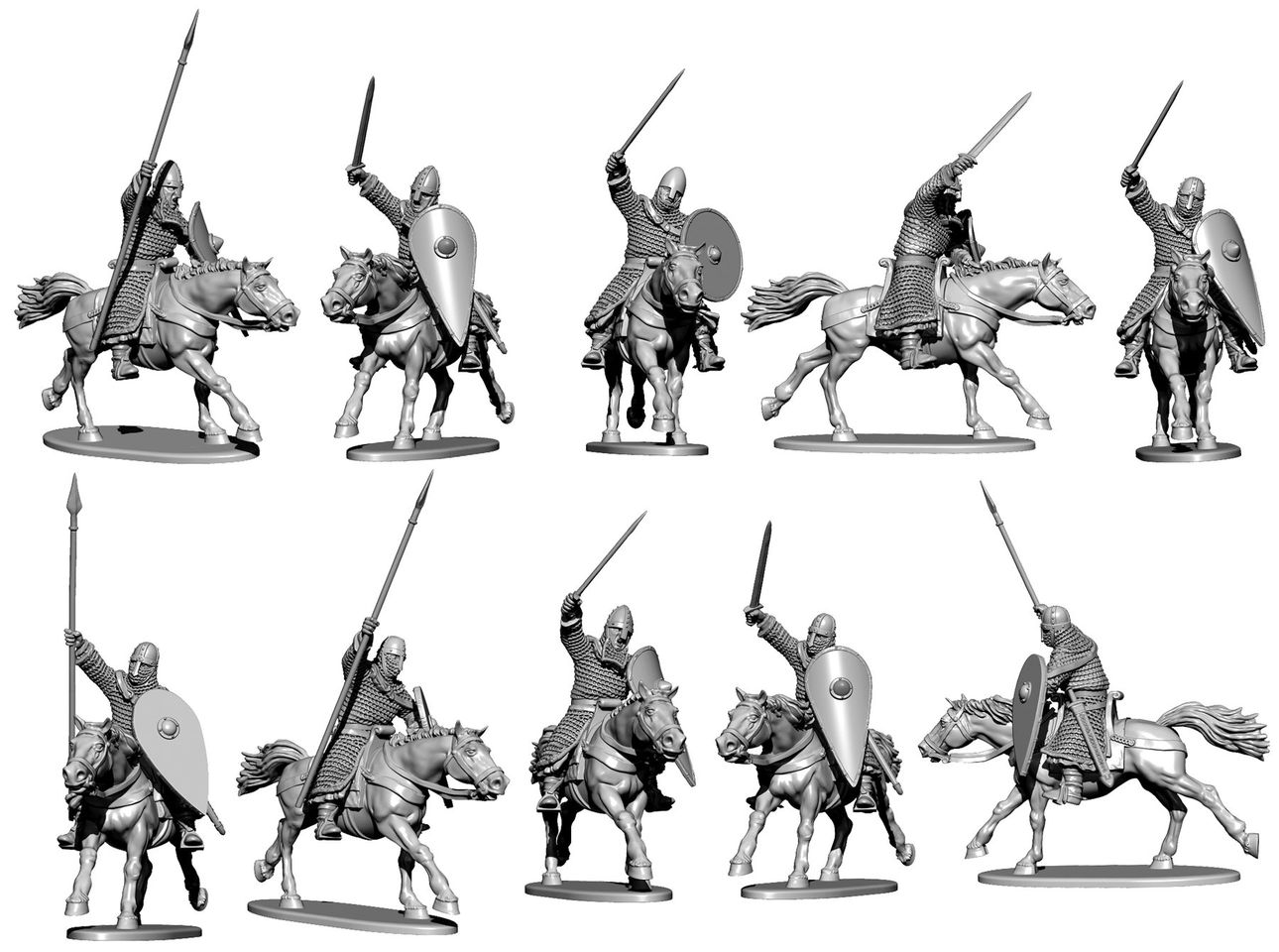 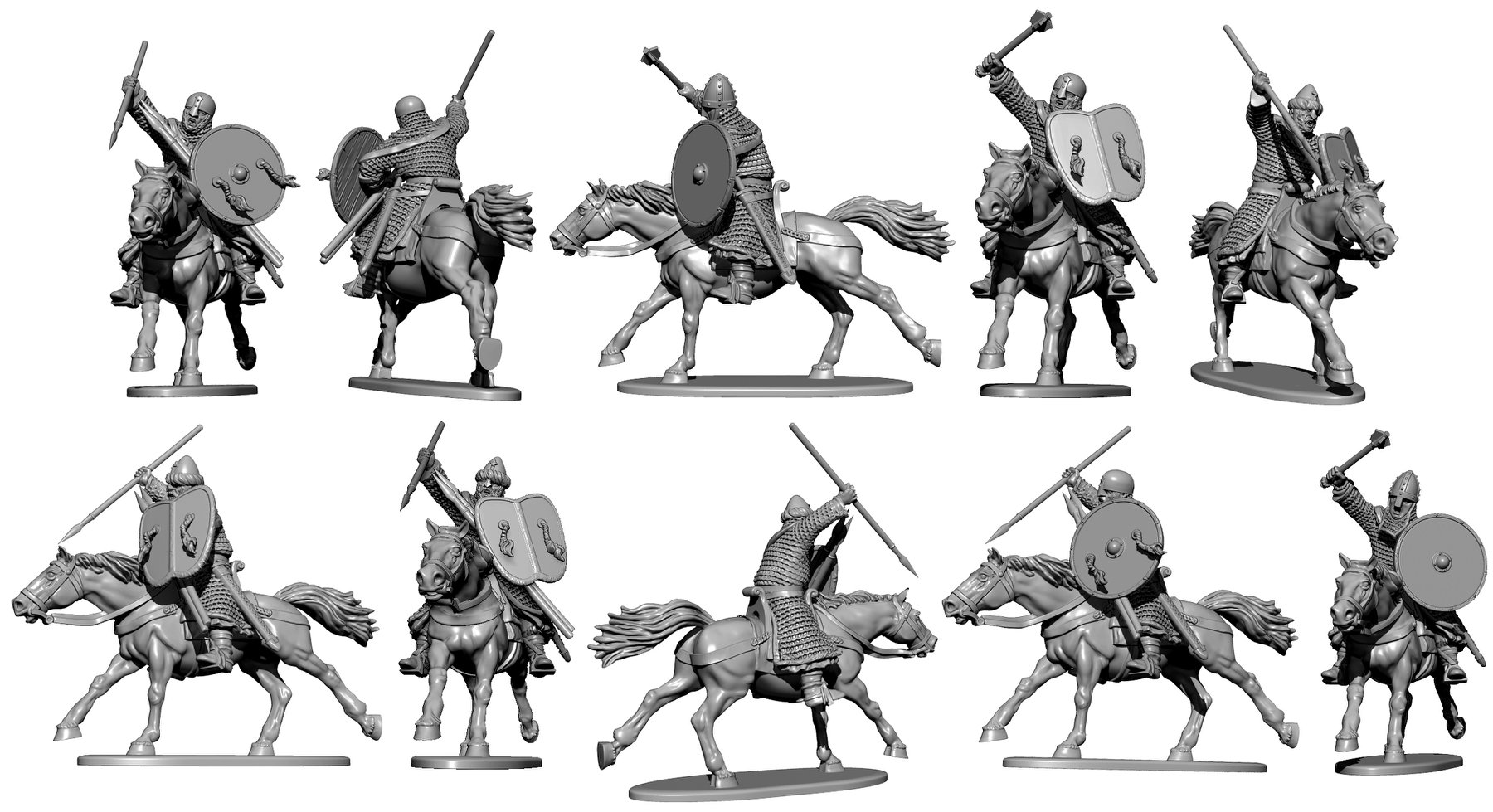 Norman Cavalry Figure 5. This figure wears scale armour and has an assortment of helmet, shield and weapon arm options. These figures can be used as Normans, Spanish, Andalusians, Early Crusades and other European nationalities.

There is one more figure to do after this and a few extra head and shield options and then it is done and ready for the tooling layup and then tooling stage.

Scale armour was not as common as chain but was worn and so the 6 figure body frame will contain 4 in mail and 2 in scales. It is interesting to look at the Bayeux tapestry and the way certain types of armour are depicted. The mail armour is easy to identify as it is depicted as circles.

Quilted armour is depicted either in squares or diamond patterns, but a few and in particular on the depiction of Bishop Odo has triangular patterns for his armour. Some think this may be quilted armour but if that was so why not depict it as the square or diamond pattern? It looks very much like a crude way to represent scales. Some Italo Normans have been depicted in scales and there are mosaics and illustrations depicting scale armour from the early 11th Century up into the 13th Century. Hopefully that will raise some friendly and good natured debate. 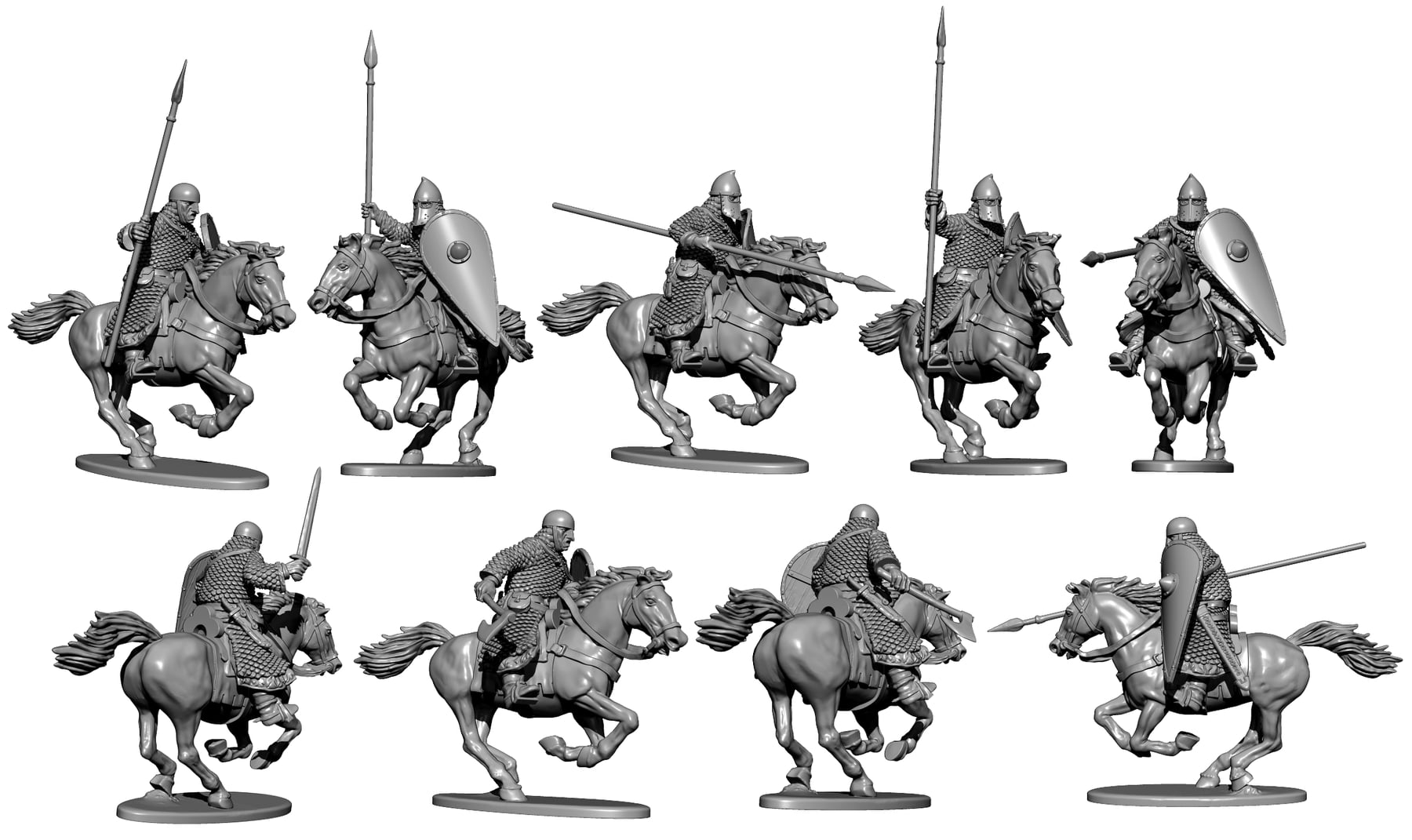 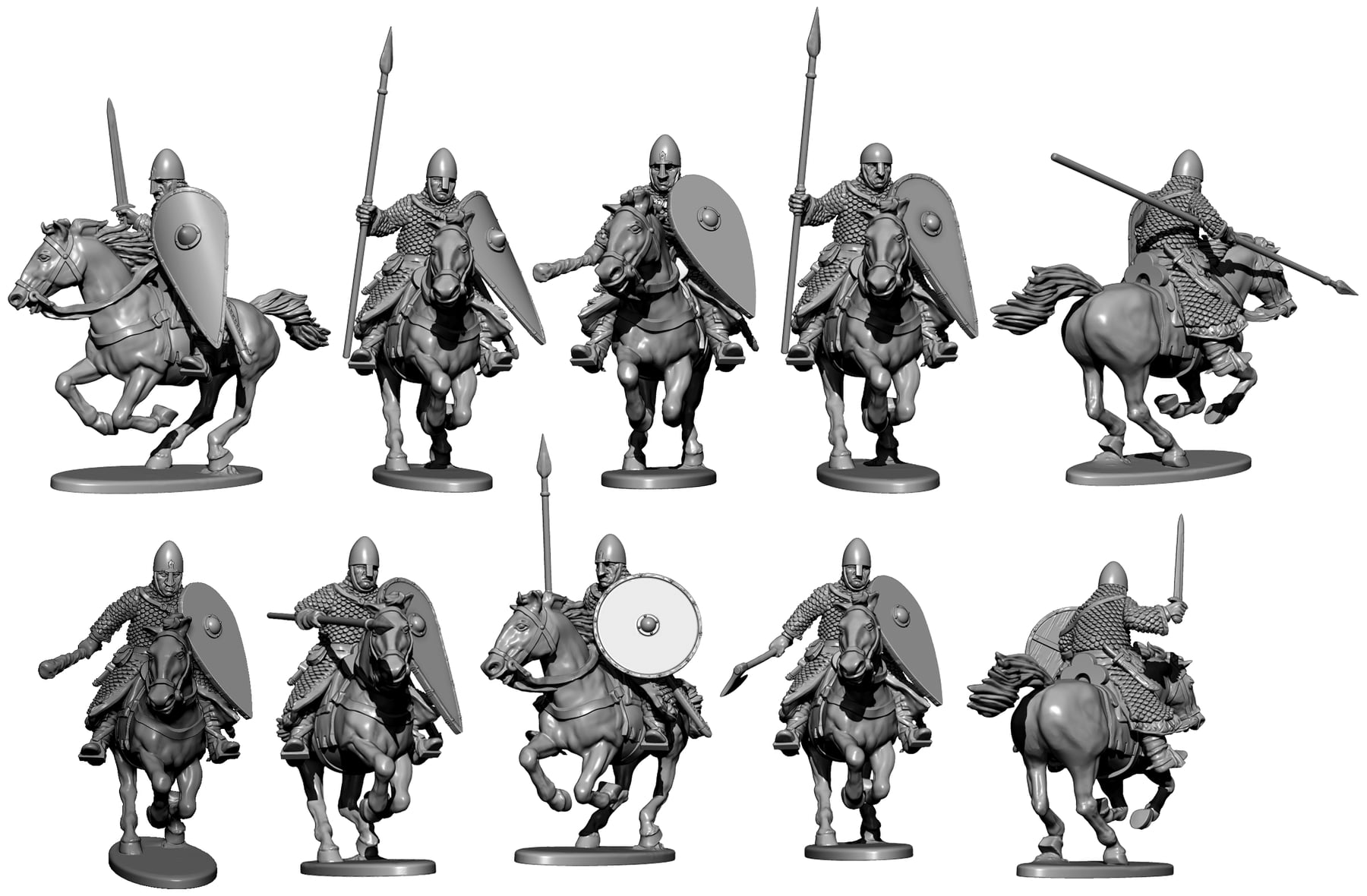 Norman Cavalry Figure 6. This last figure shows off a few more of the Italo Norman and Andalusian head variants plus some more shield variants with a convex round shield and two flat topped kite shields.

We also made some Andalusian style swords, sword scabbards and daggers. So this will make this an extremely versatile set of miniatures. You can make Normans, Italo Normans, Early Crusades, Spanish, Andalusian and other European nations heavy cavalry. And as some people have mentioned these would make some great cavalry for fantasy games as well. 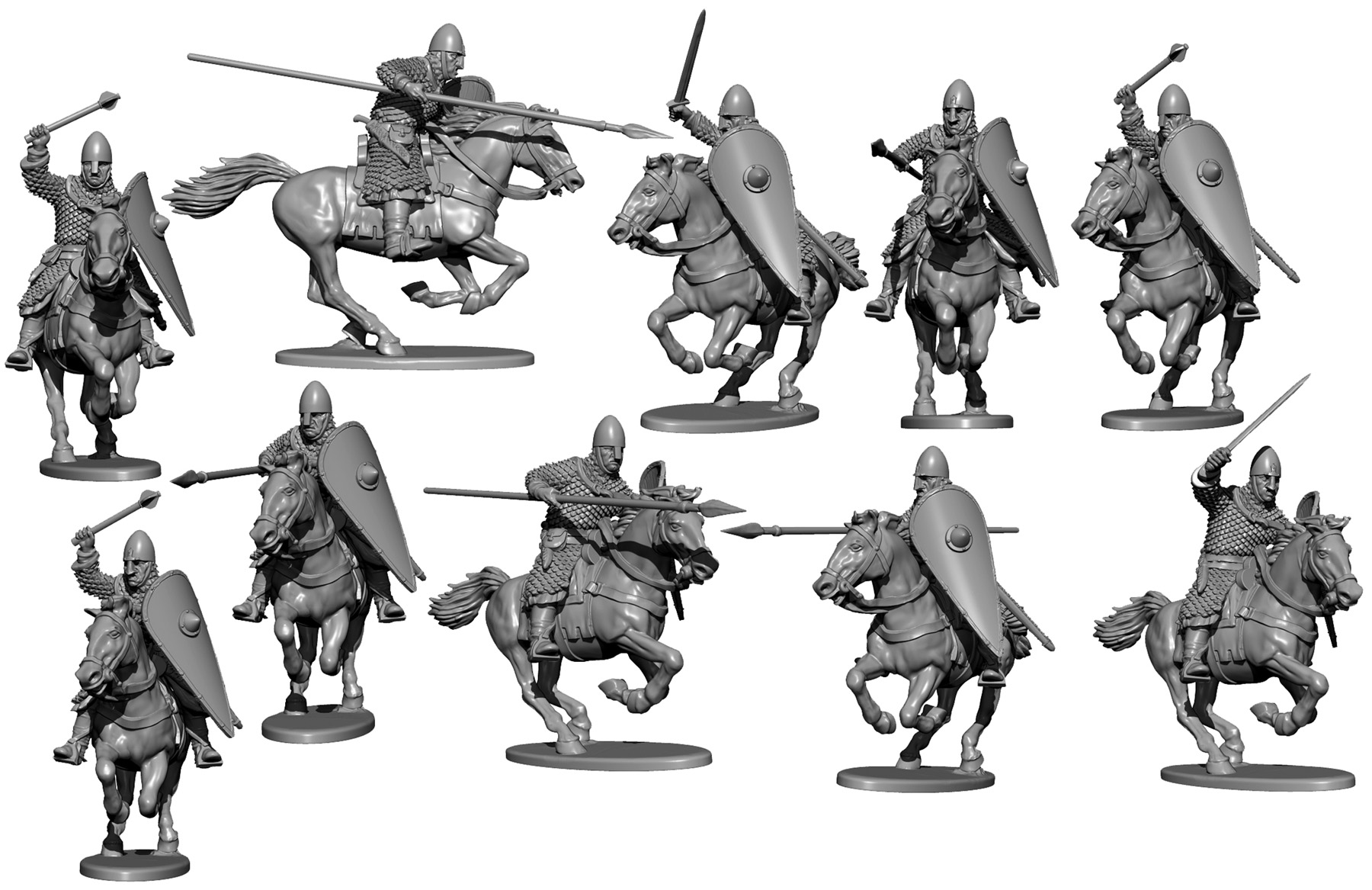 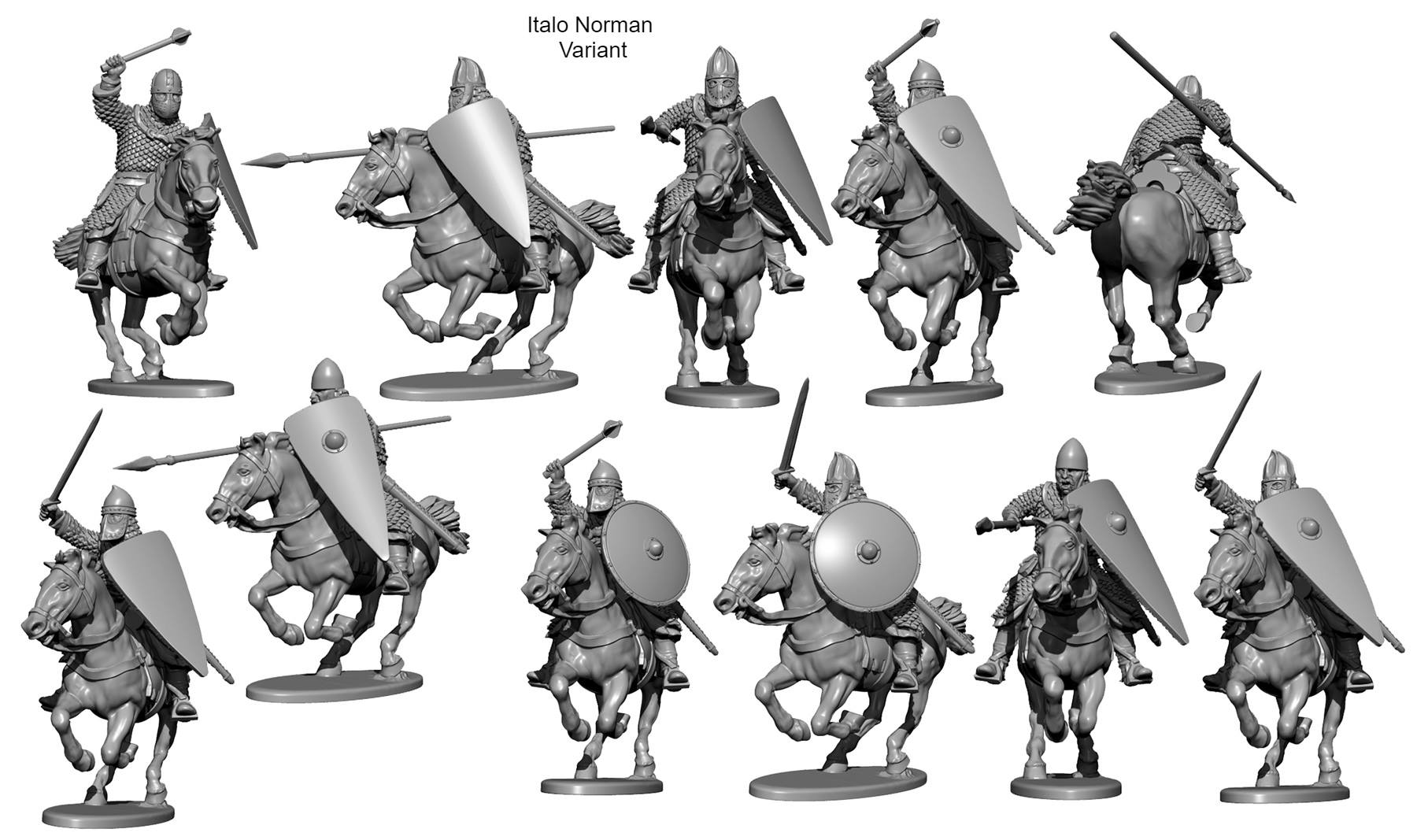 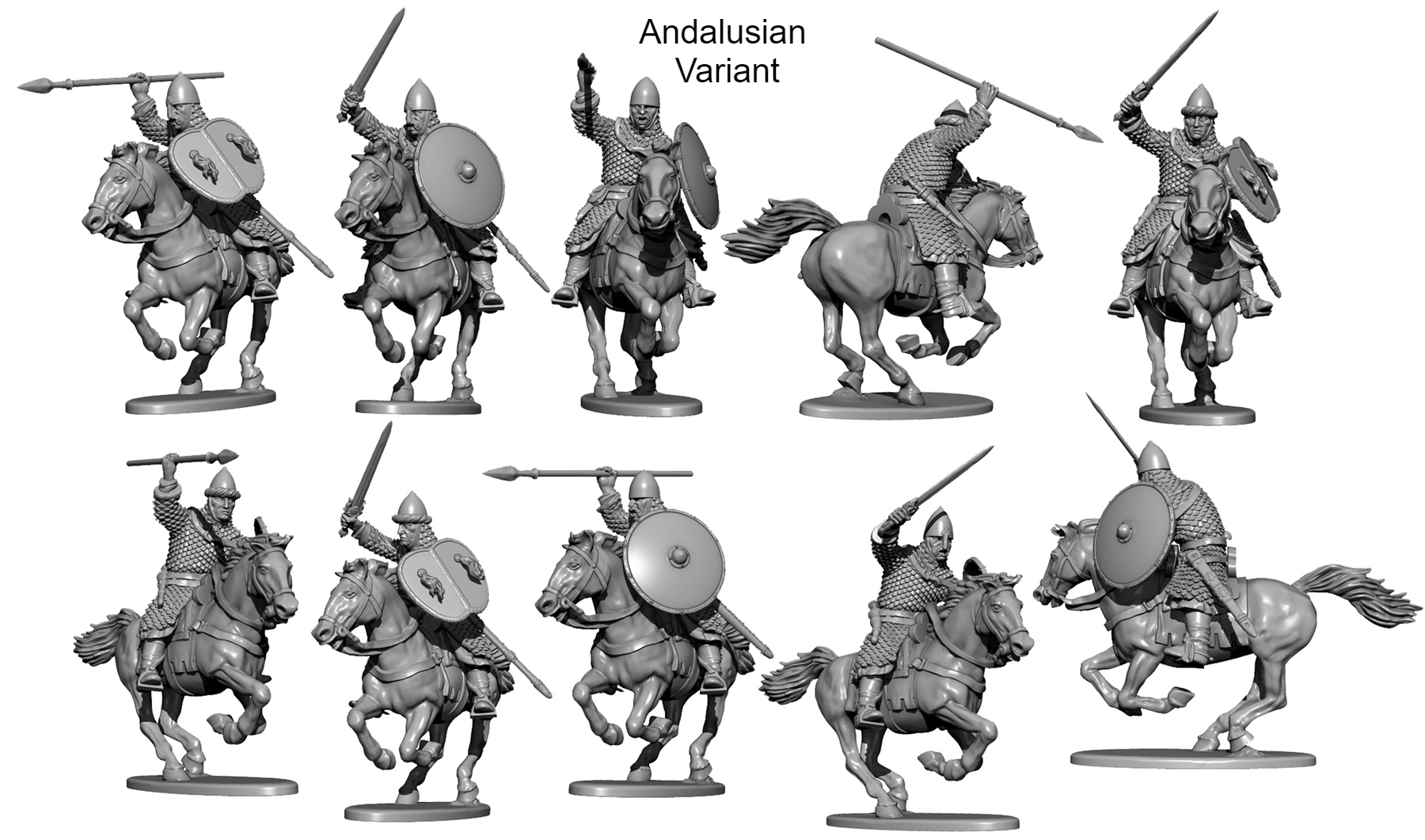 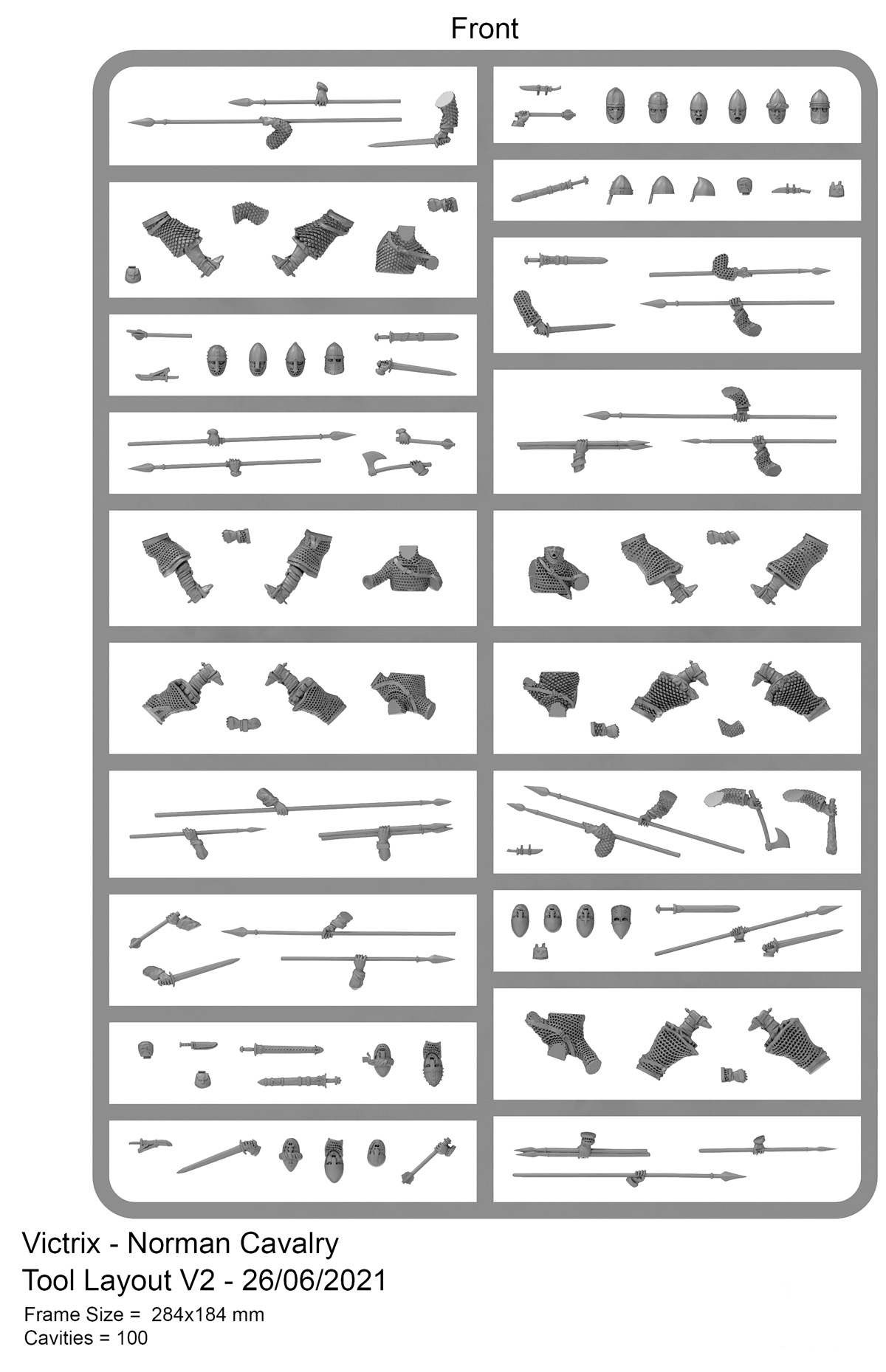 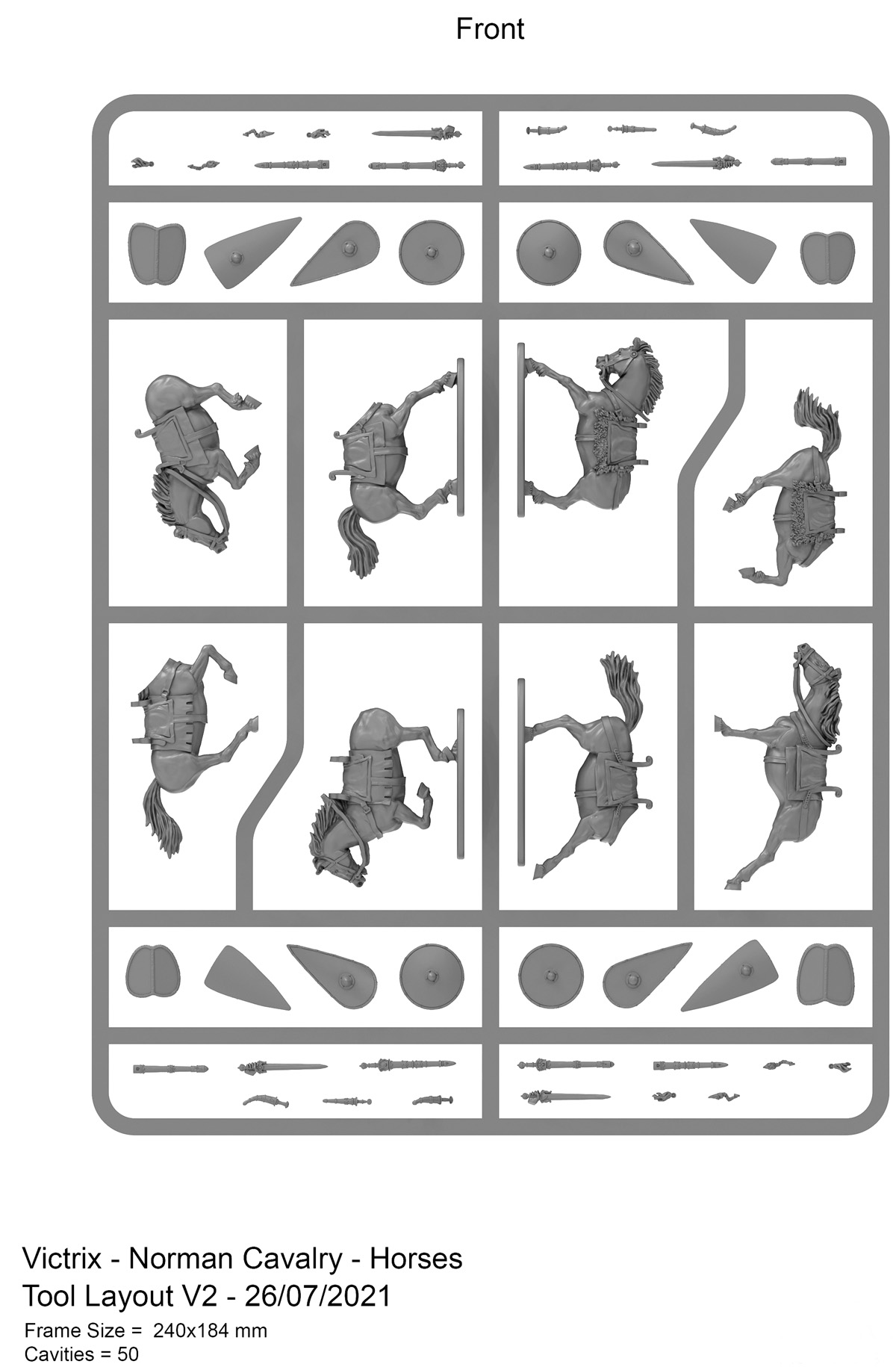 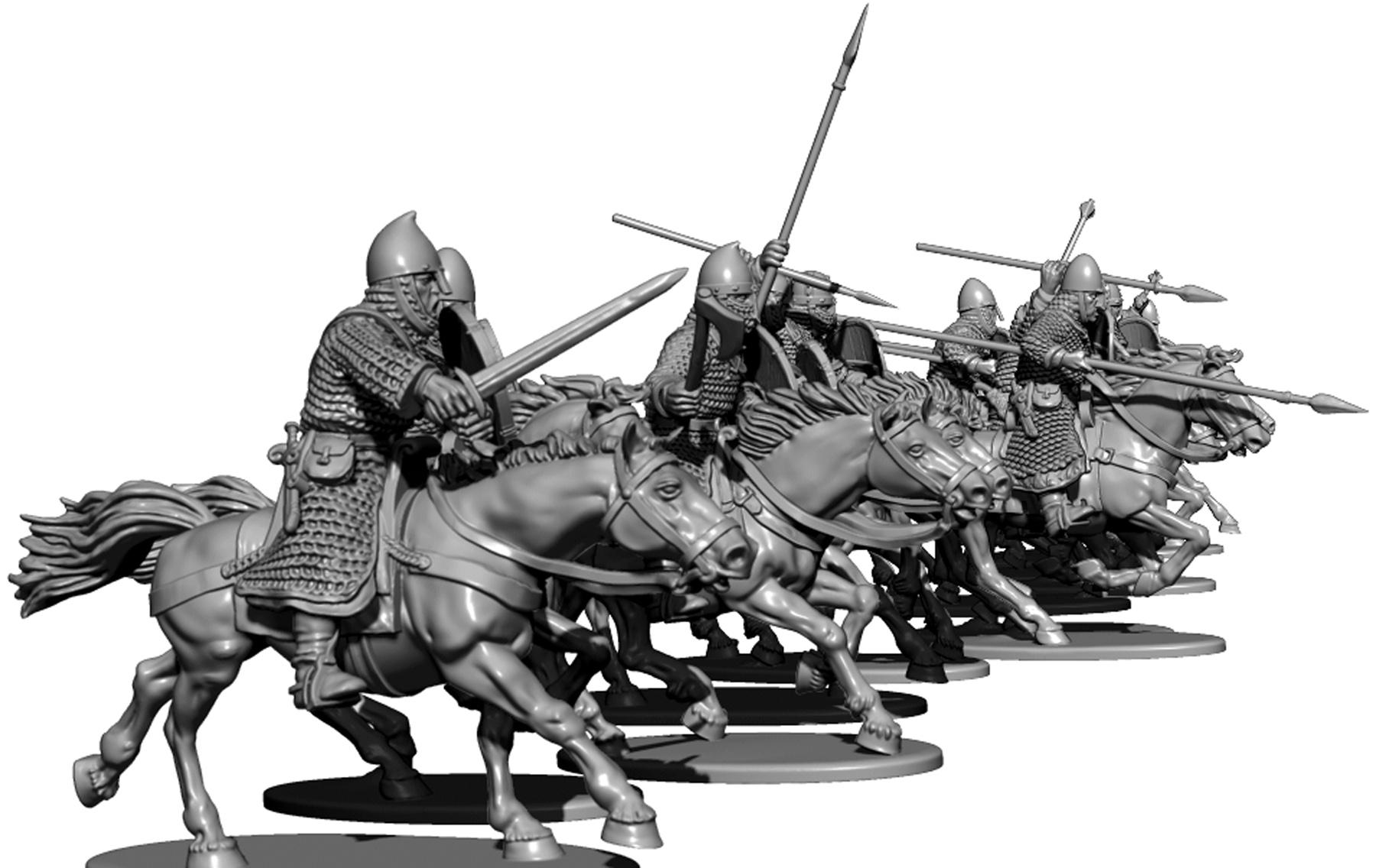 Just got my sets – please note that the horse halves do not fit perfectly unless you shave off some plastics from the tail-stump and at the neck (just the connectors, nothing from the outside). Unless you do so, the sides stand some 0,5mm apart at these points. Once cut away, the fit perfectly, just like the rest of the set.

These figures look sensational. Can we pre-order?

Absolutely awesome cavalry to suppoets the foot!!! When will they be available to purchase?

When will these be released?

These look fantastic! I hope you can release them soon! I really love how you guys do the research and find all of the really cool equipment and weapons from antiquity—the real stuff is always so much more impressive than fantasy is. I have been painting up some of the figures wearing scale armor from your Norman and Saxon kits, and I really have enjoyed them. It looks like some of the helmets and weapons from this kit will be feasibly interchangeable with the Norman infantry, which will make for exciting conversions.

Awesome miniatures, when will they be released?

These are wonderful. When will they be released?

Shall these be released before Christmas?

Fantastic looking figures. When will they be available? Can’t wait to get my hands on a set.

I love the Norman Infantry and now I need to have these cavalry to support them. I’m with Mike Shepherd (above) – do you have a ballpark guess on a release date for these sweet minis…?

When are we likely to see these for sale?

I am looking forward to buying them I haven’t done any modelling for years could you recommend any glue .