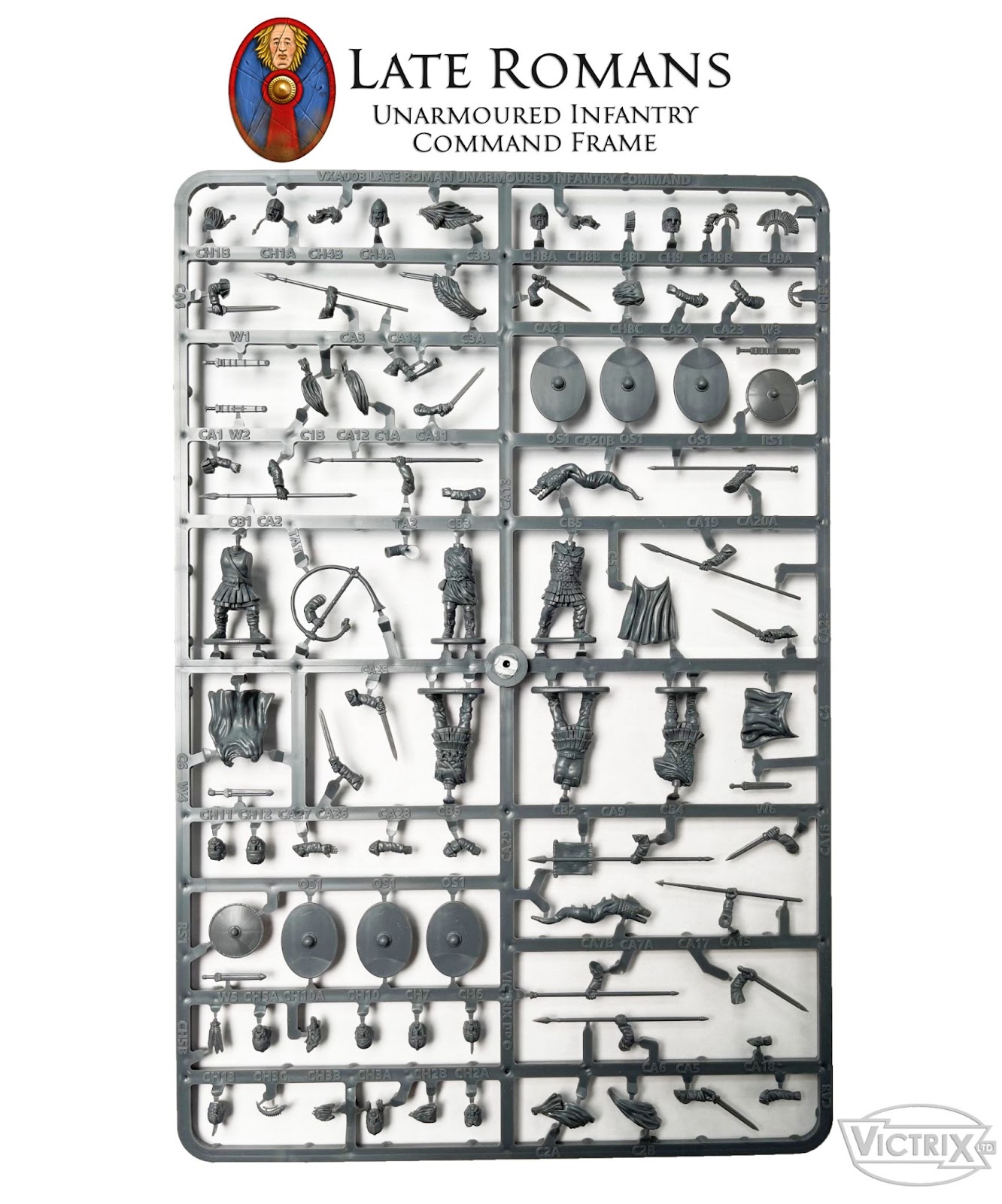 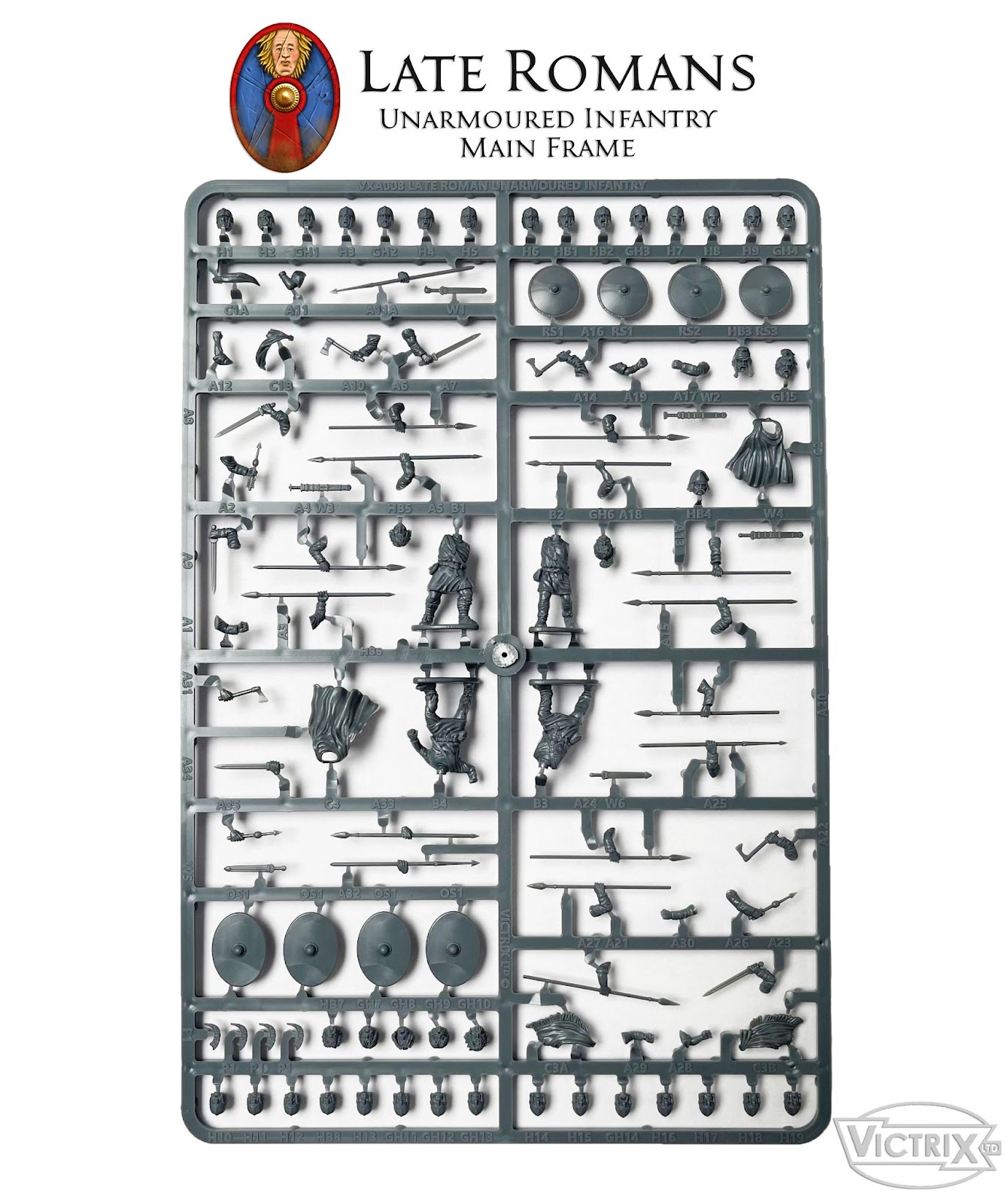 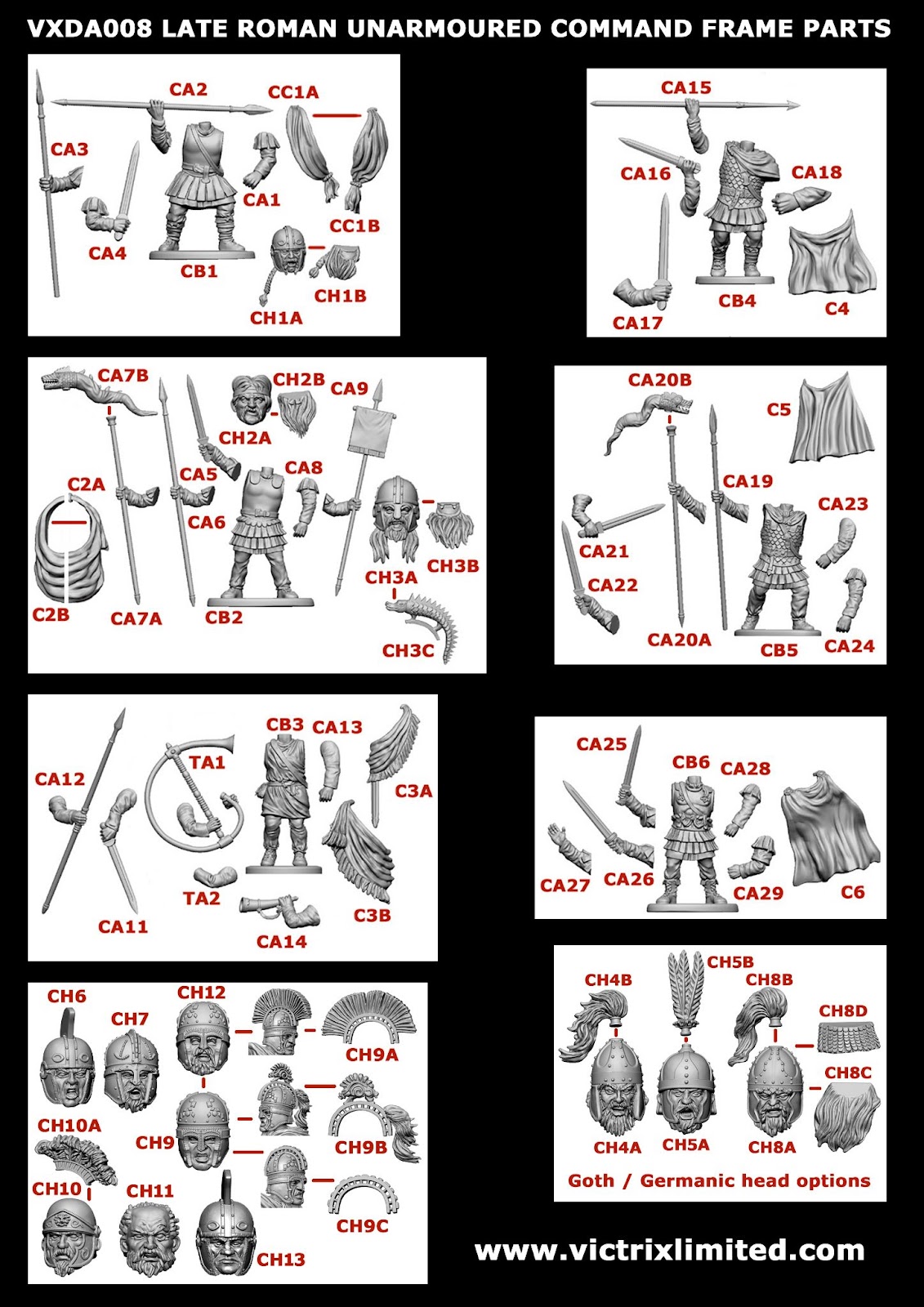 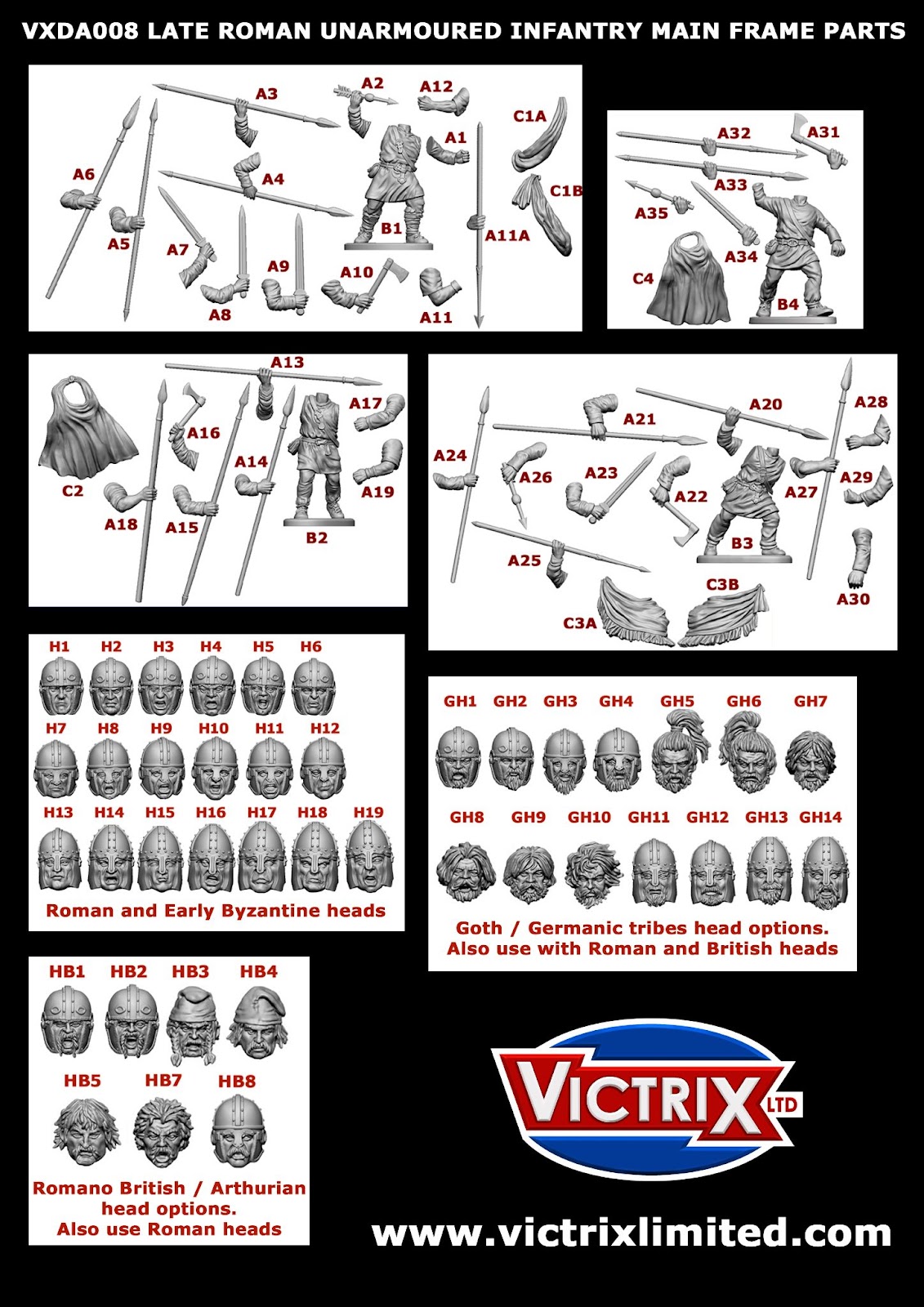 This is an incredibly versatile set. We are including 30 heads on the main frame alone, covering various styles of helmet with clean shaven faces and helmet heads with facial hair and a lot of bare heads. A mix of Large Roman oval and round shields. There are cloaks and a huge amount of weapon arms including thrusting spears, Swords, axes, Angons and darts.

Here are the first 4 sketches for the new Late Roman unarmoured infantry set. 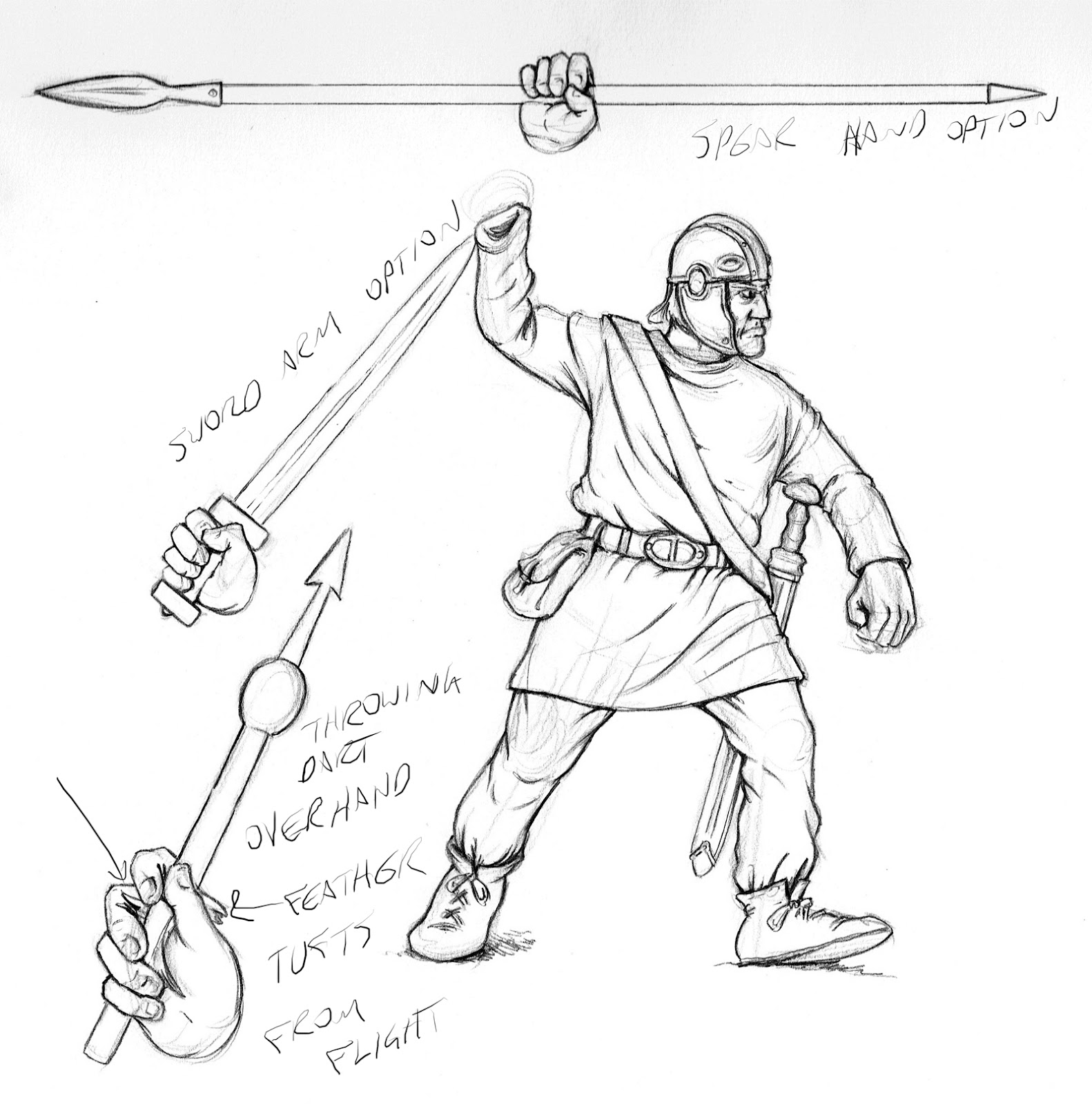 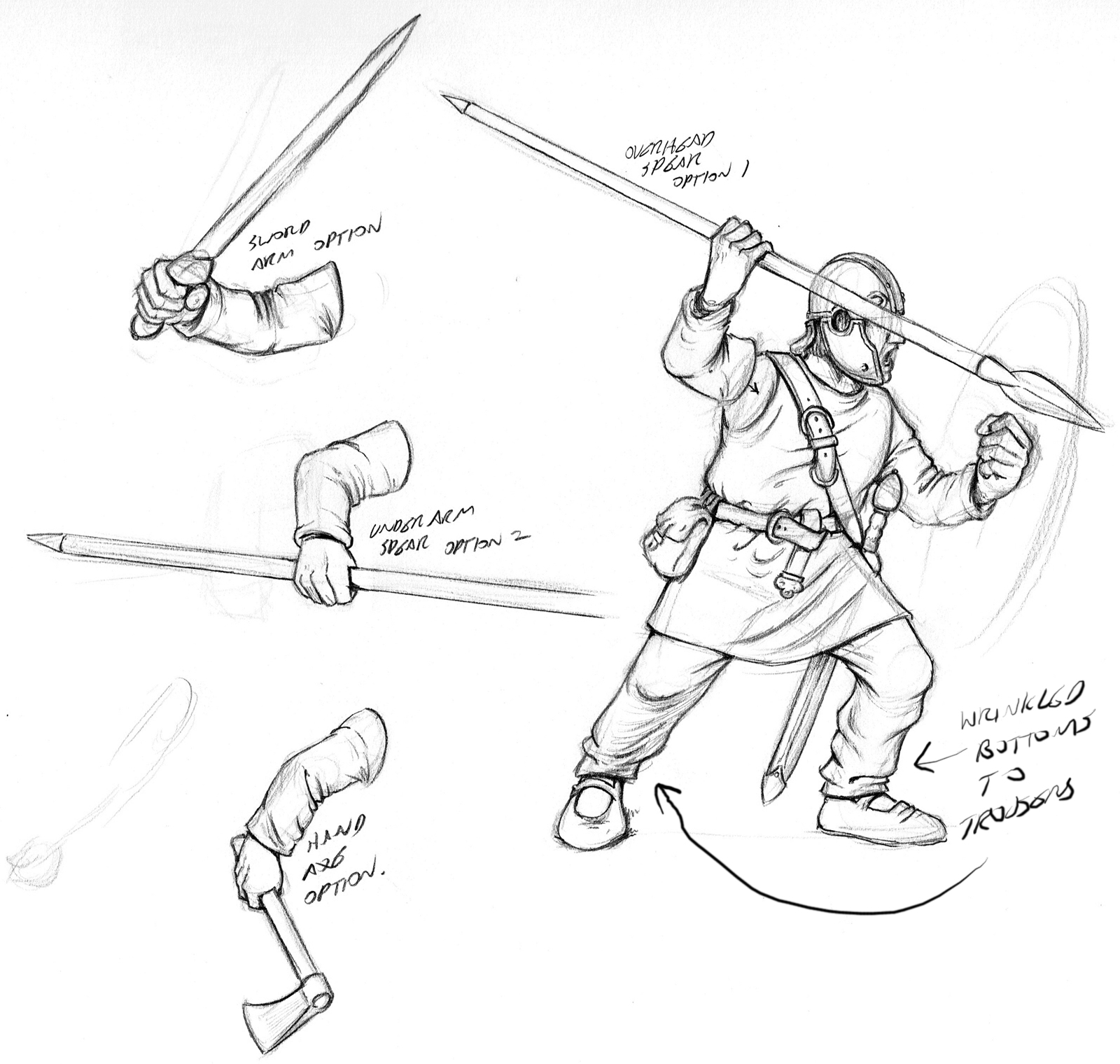 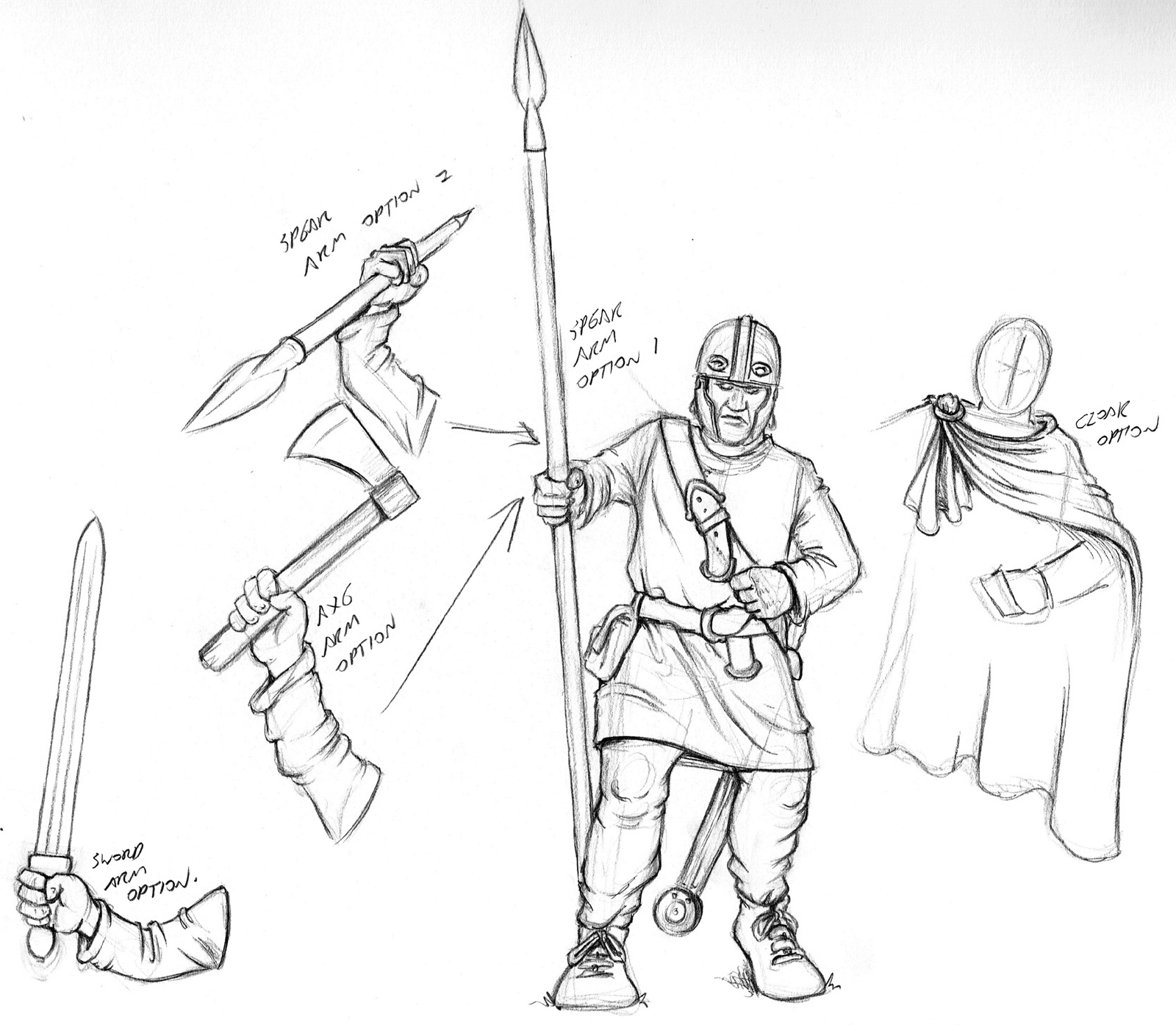 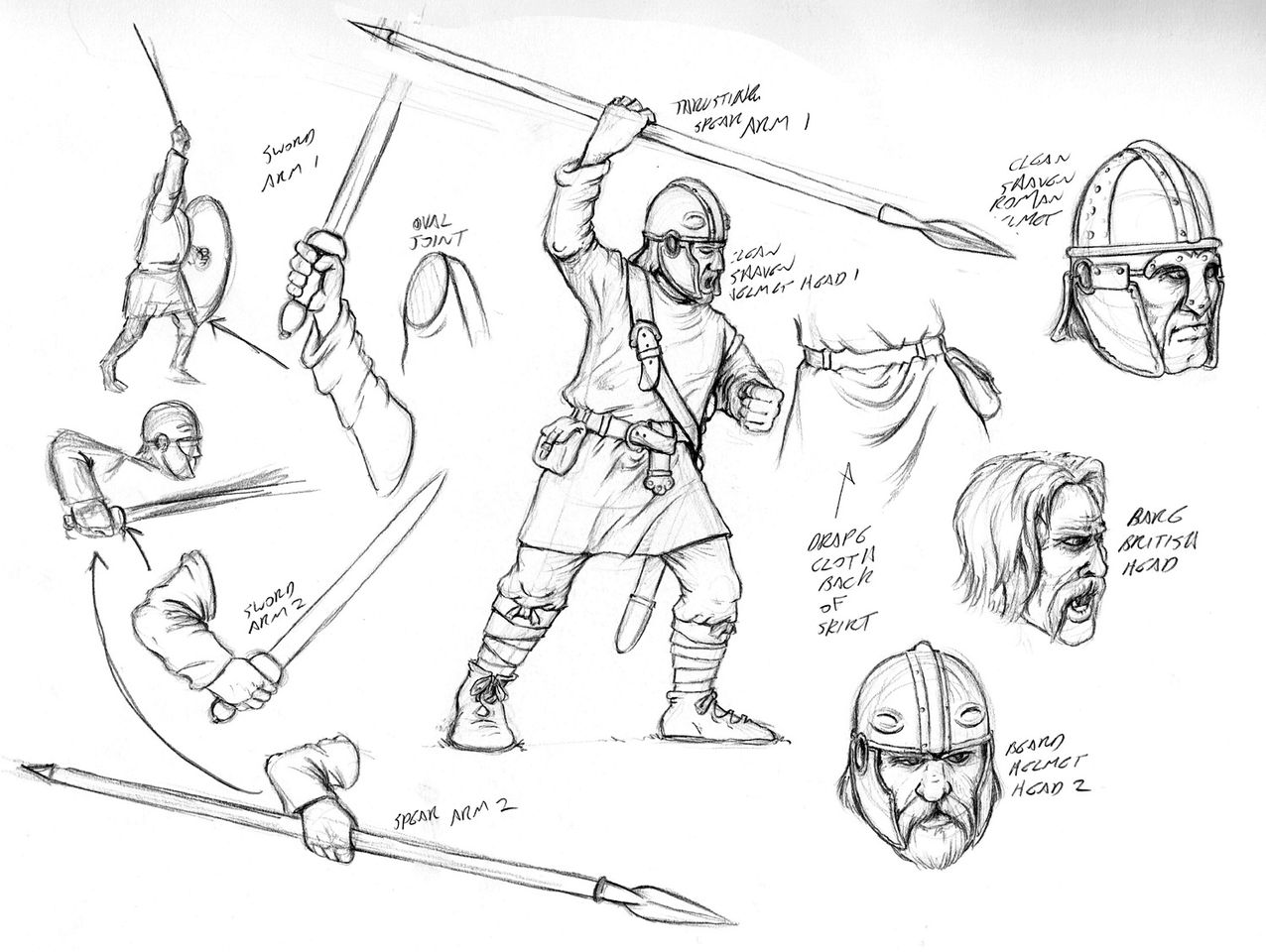 These first four are unarmoured infantry with an assortment of weapon arms that include, spear, Spatha, hand axe (Romano British could use axes and clubs as sidearms) and also throwing darts (Plumbata). There will be a few of these in various styles of being thrown. Some very interesting experiments on You Tube of how these were thrown, underhand, overhand and like a javelin.

There will be numerous heads in this set with some different styles of helmet and some bare heads and suitably Romano British heads. We will add some Spangenhelms which will give this set more versatility again as Goths and Early Byzantines.

There will be cloak options and some cloaks rolled up across the chest which will help give some of these figures a distinctly British flavour.

Here we have the first renders of theLate Roman / Romano British figure 1. 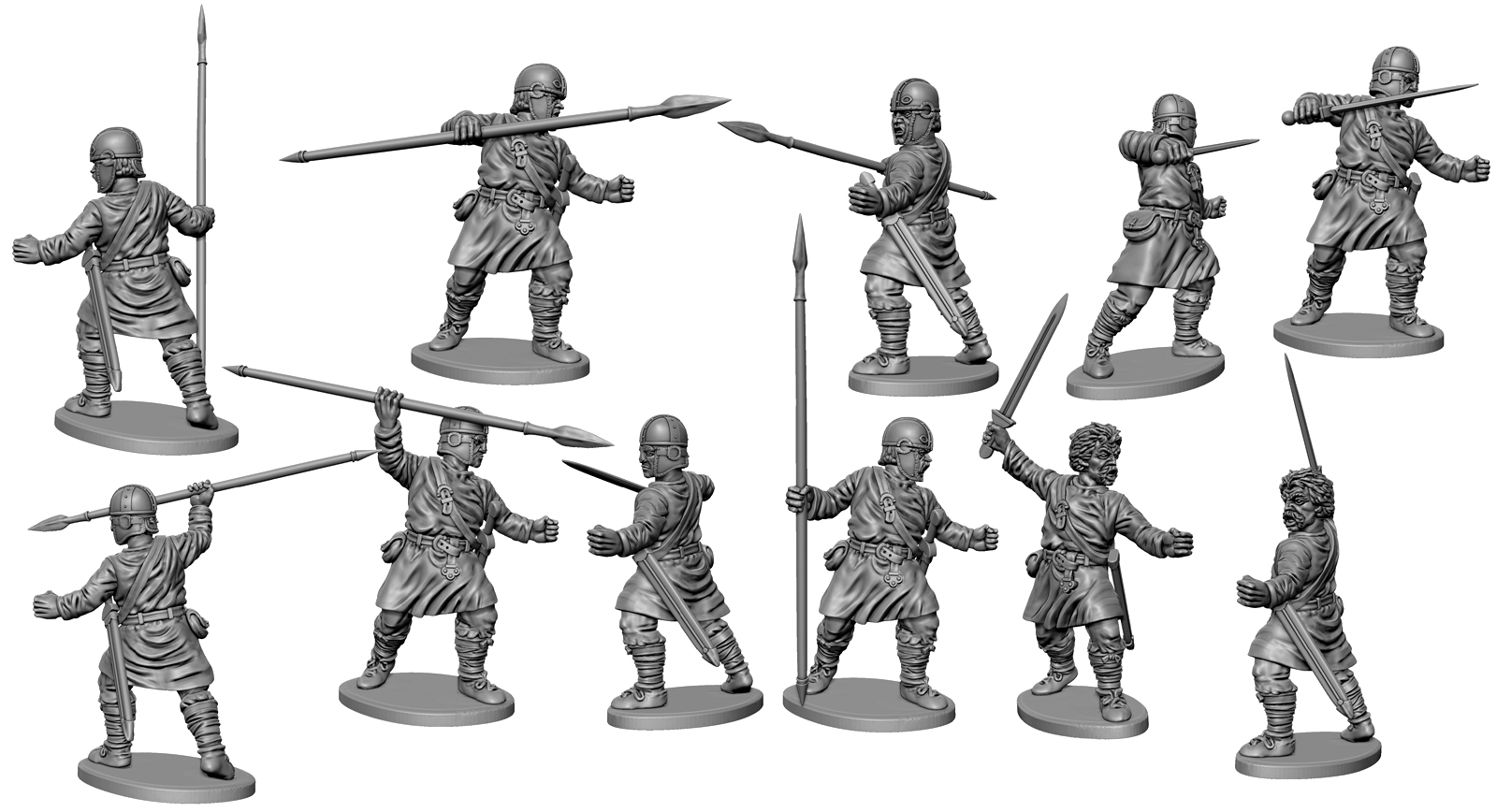 We have two helmet types so far on this figure but with more options to follow. Plus there will be bare heads, heads with facial hair and some Goth type heads to really extend the use of this set from Late Roman/ Romano British to Goth, Early Byzantine, Early Franks etc… 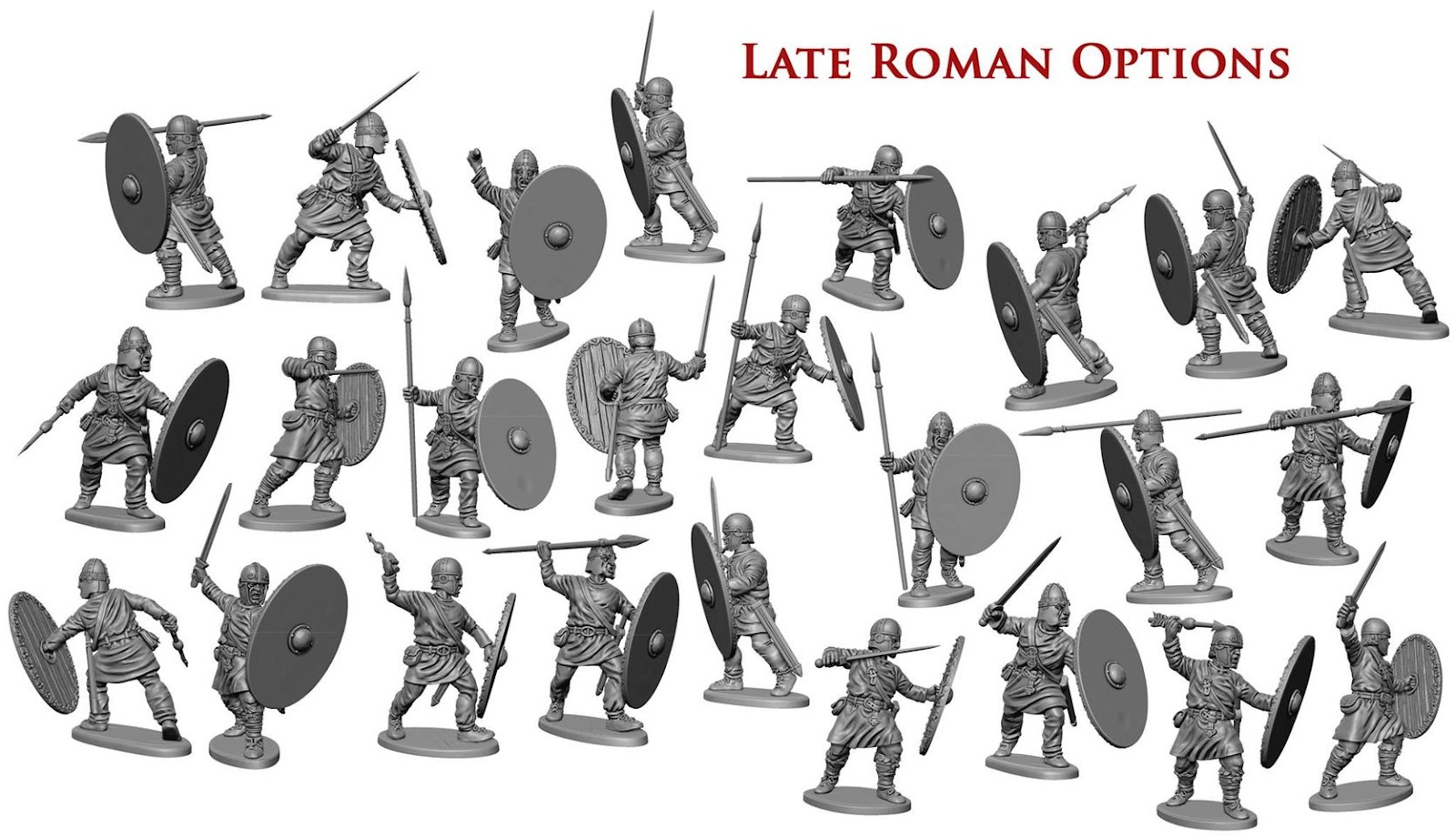 Here are some renders of the firstRomano British / Late Roman command figure/character: 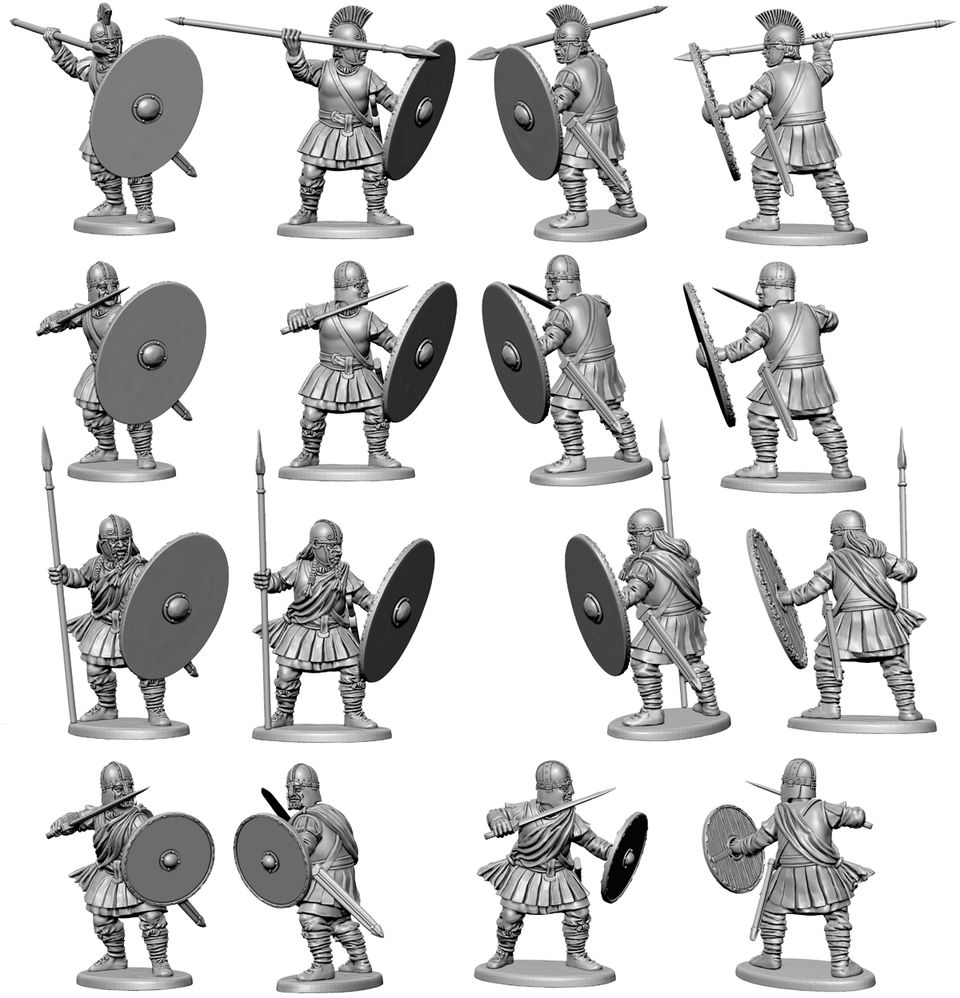 He wears leather armour with Pteruges protecting his upper arms and waist. He can be a character figure or command figure.

He has a variety of helmets including crest options and includes a more British style with long hair and braids with a rolled up cloak across his chest as an optional piece. Painting him with plaids and checks on his cloak and tunic will provide a great look for your Romano British warriors. 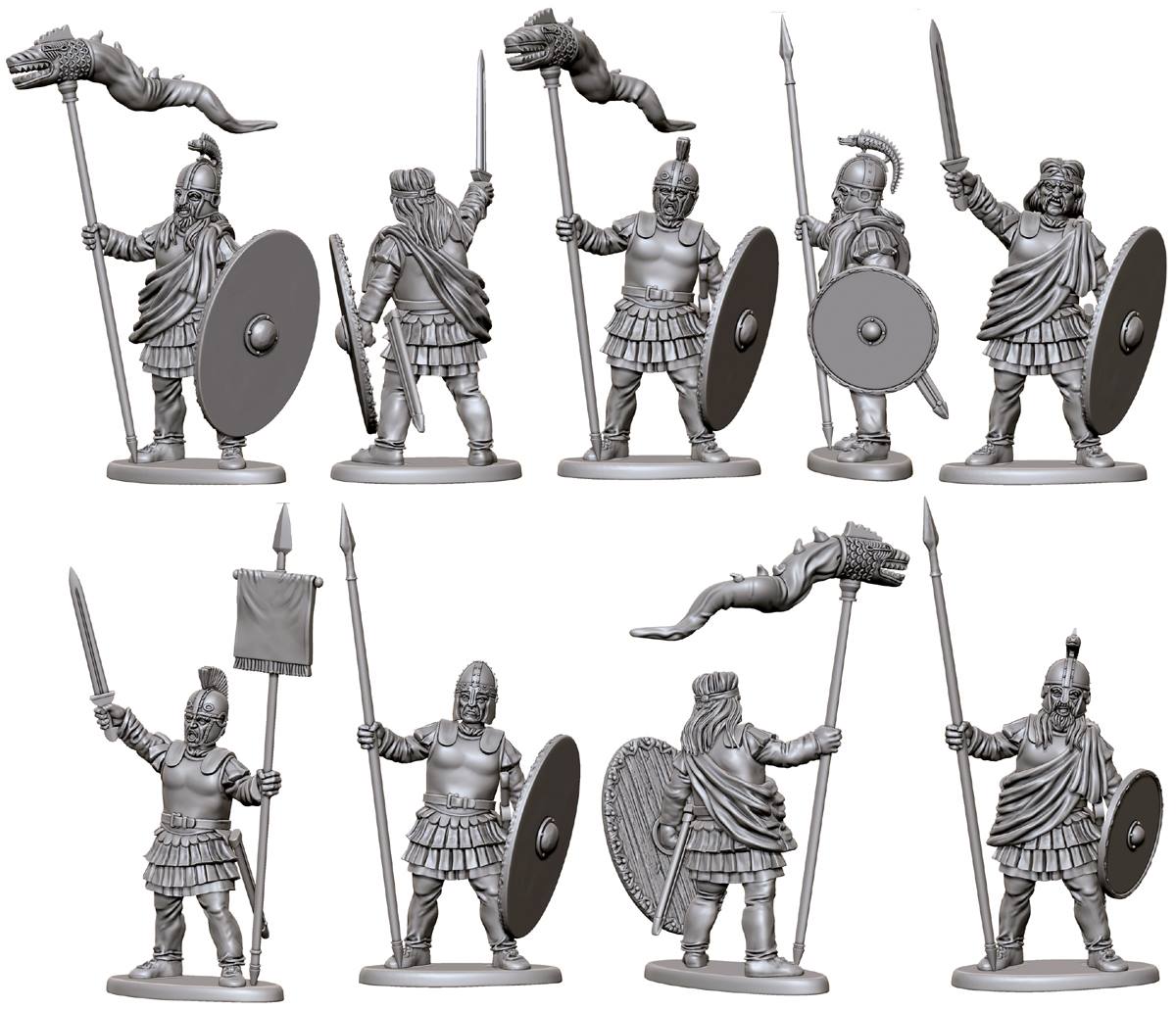 He wears a leather cuirass with Pteruges and has multiple head options. These include Roman style helmets or long hair and cloak to give more of a Romano British / Germanic feel to the figure. He also has the option of a Vexilum standard or a Draco.

Parts from other figures in the set will be interchangeable which will give you quite a bit of freedom to create a variety of unique miniatures. 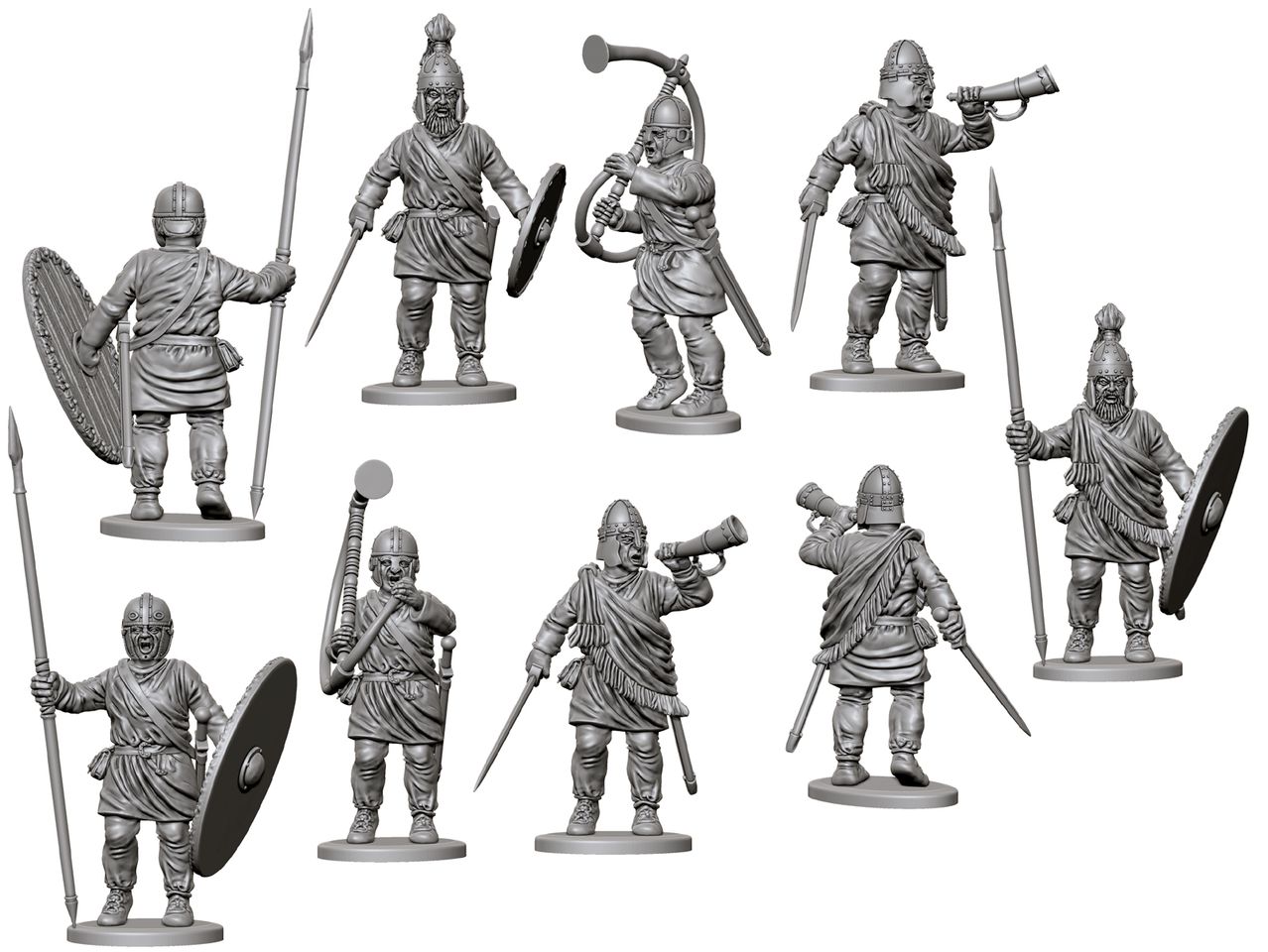 This figure is primarily a Musician with two types of instrument. One being the classic Roman trumpet carried by the Cornicen to relay orders to the Cohort. The other is a war horn which you can use when portraying Romano British or Germanic warriors.

He can also be made into a rank and file warrior with sword or spear. We have started on some Gothic style helmets to get yet more variety out of this set. 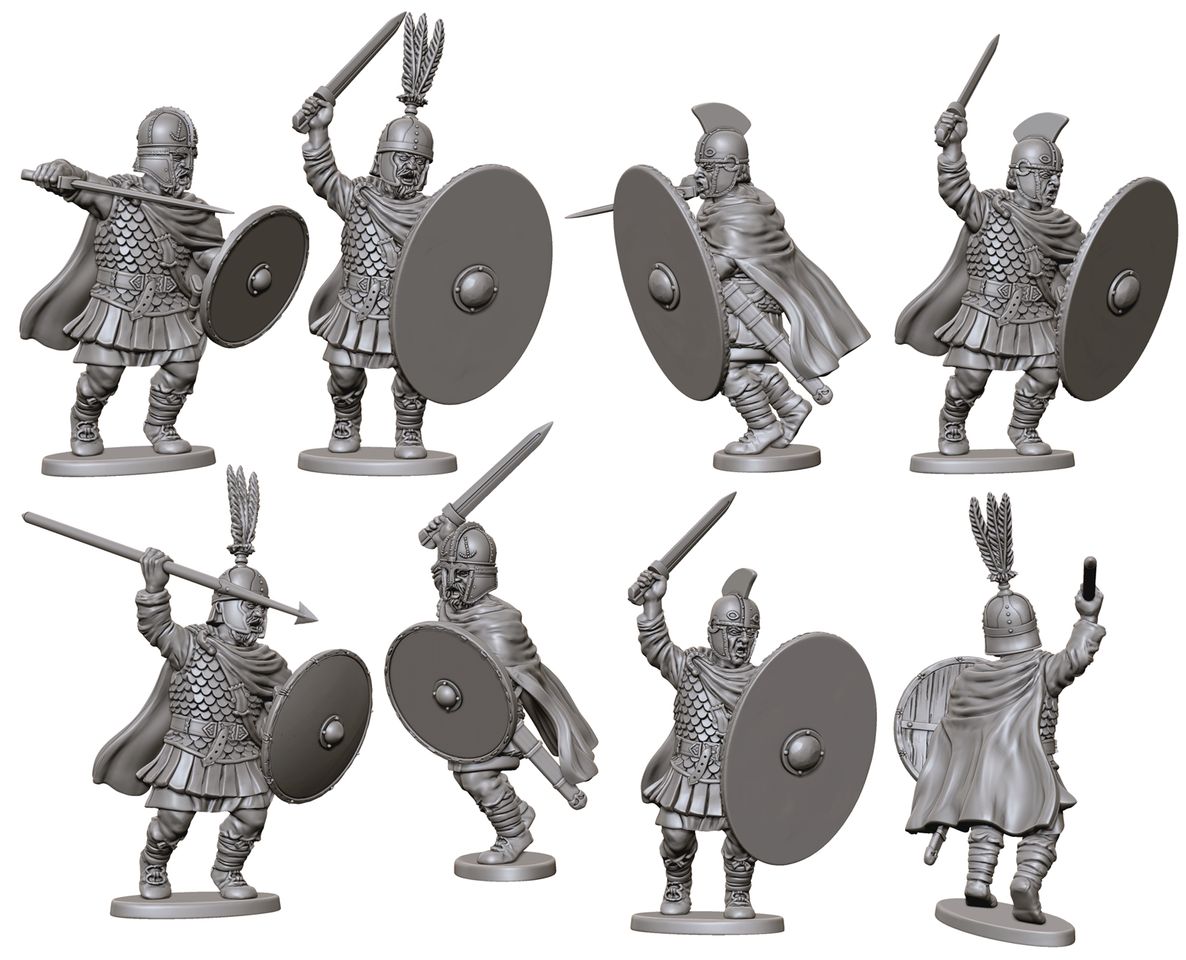 He wears scale armour and has sword arm options as well as a Germanic spear option. He has the Later Roman Centurion helmet with the metal fin on top as well as a more elaborate helmet suitable for a higher commander or Romano British chief plus a Goth style helmet.

With some of the extra helmets being worked on at present he can easily fit into being an Early Byzantine also.

Here we have the design sketch and some renders of the 5th Late Roman command figure: 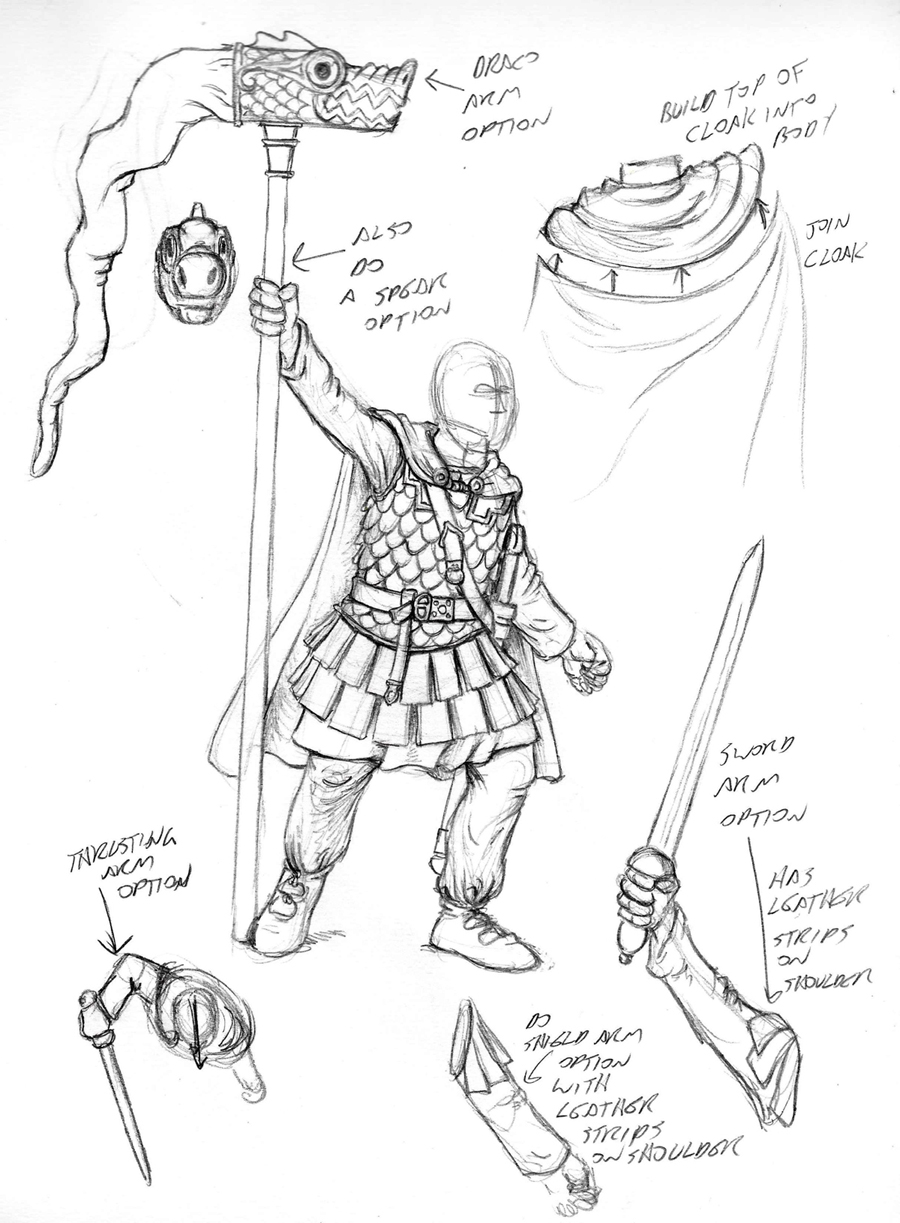 He is wearing scale armour with leather shoulder guards. The  fancy helmet is based on an elaborate cavalry helmet and we have produced some multiple crest options for this so it can be used as Roman, Byzantine, Romano British, Germanic.

He has multiple weapon arms including spear, swords and a Draco standard option with a choice of oval or circular shield.

We also have some renders of the figure with the Goth head variants with options for long hair to plug into the back of the helmet.

All these heads will be interchangeable with all the figures in the set so you can create a great array of individual looking miniatures.

Here are renders of the 6th and final Late Roman command figure: 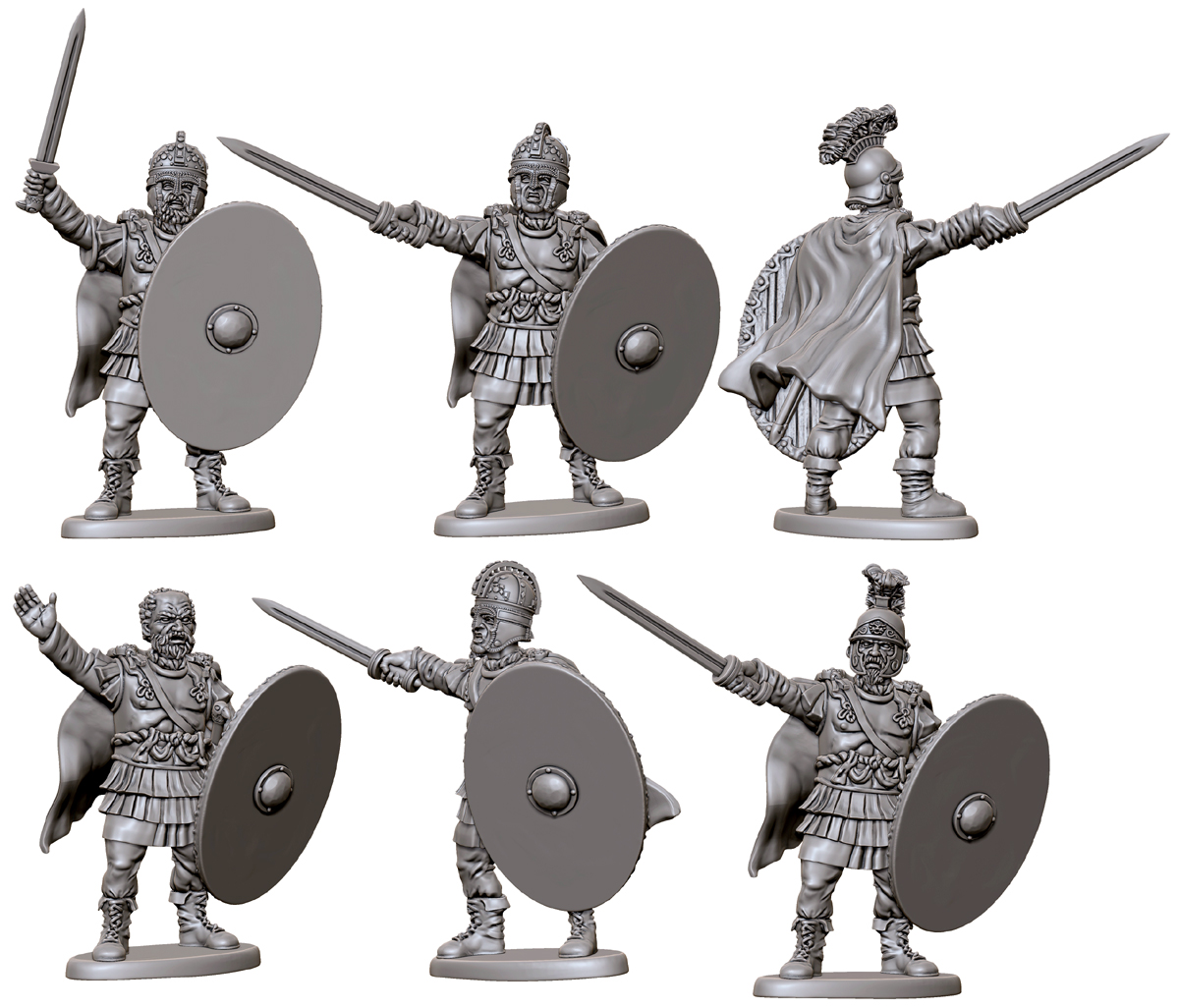 He wears a metal breastplate and sash denoting his higher rank. He has multiple head and arm options so can be used as a Late Roman Legate or Tribune or a Romano British commander.

Below we can see some of the different options available from this first set of Late Roman/Romano British/Goth infantry command and personalities frame. As you can see there are plenty of arm and head options which can be used on all figures in the set to make a huge variety of poses. 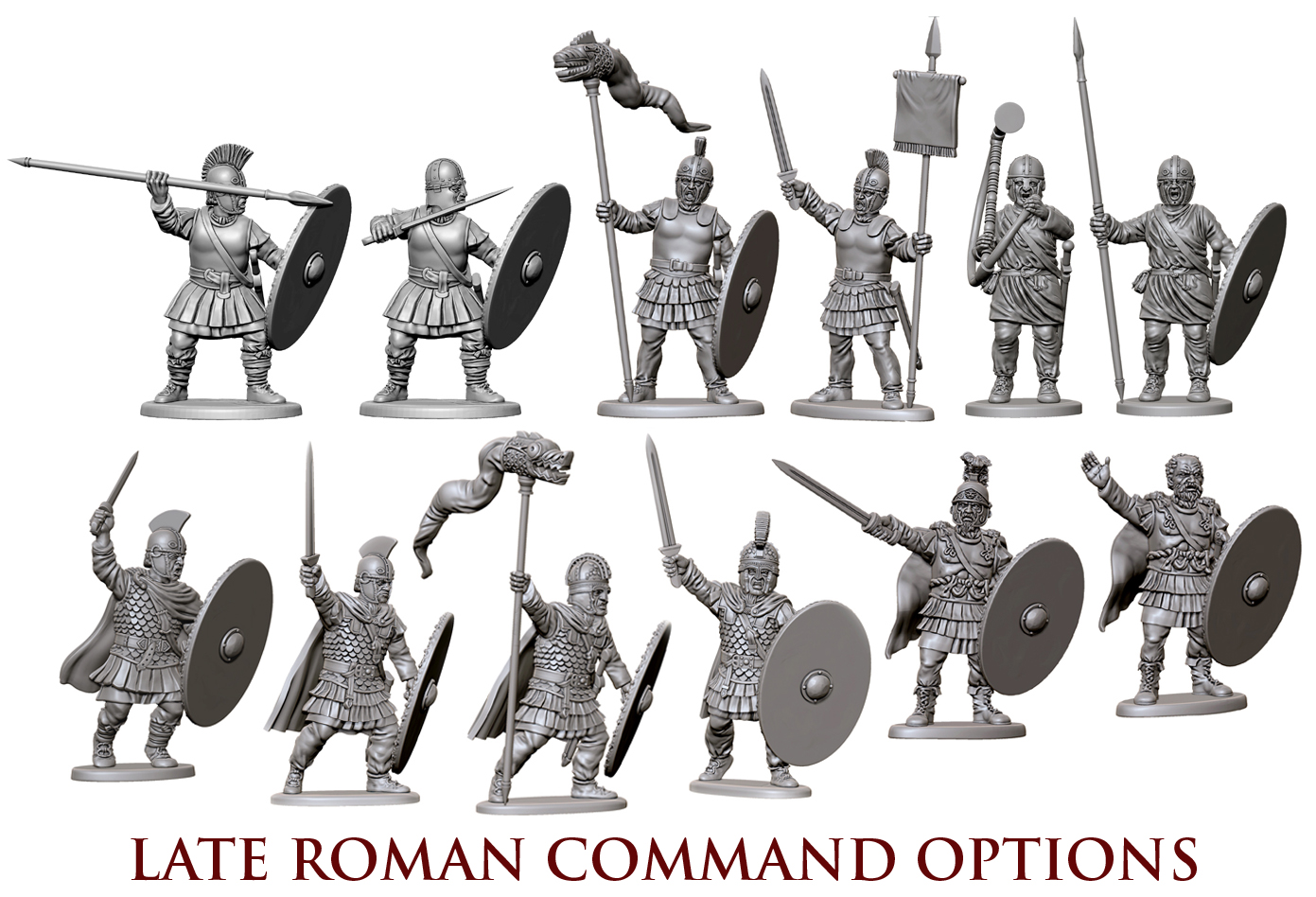 Who doesn’t want more Romans and an excellent job on these! Looking forward to them being available soon. Such a variety of options and well supported by LBM transfer sets. Keep up the great work.

Wowser, I’m so looking forward to getting these. Project Romano-British will be go as soon as they are avaliable.

I’m really keen to get some boxes of these. They look excellent even in the planning stages. Hopefully we can fill our armies with them soon!

These look very good indeed and an absolute must buy !

Does anyone know if Victrix respond to any of the comments here or are these just comments boxes ??

Any timeline on these coming out ? I’m looking to start an Romano British army very soon and don’t want to invest in another companies line if these are coming out soon :)

Can’t wait for these guys to come out.

Ok here are the late Roman legionaries! I saw the archer post and I was wondering where these were… I should have just scrolled down lol. These look great. The other attempts that have been made at late Romans will be decisively swept aside by this set. I think I’ll just wait for them.

SOLD! 20mm is my scale of choice… But I think these will make me break the habit of only buying 20mm.

I’ve never immagined to have such a variety of choises. And this is only the unarmoured set!
Great job guys, I can’t wait anymore!
(For the armoured one, more crested helmet to have a legio palatina of the praesentalis army, please.)

Hey guys! I may have missed this, but do you have a set that includes the ancient Celtic/British "Waterloo " helmet? Thanks!!